This post was originally just written for Barney, but if you are reading it, that means he thought it was a good idea, or okay to share.  That being said some details have been left out for your viewing pleasure- ( basically so you won't be scarred for life).


As you may or may not know we've had a bumpy go of it for a few days.  Actually as I am writing we still are in an okay place but not fantastic. We are making plans for his day off and the weekend. We have discussed options for those Horror Moan days when we can't physically connect.  I'll stop all do good- doers now, and I appreciate your efforts...but lets just say CSI would be called in ...'nuff said...so when we WON'T reconnect, on those days we've decided  on Mega Cook Together Days like making Chinese Food, wontons, springrolls, chicken balls...etc.  That is definitely a plan ahead thing- Barney said he likes the idea because he will be able to keep his eye on me and the knives at the same time...hardy har har.

Our lives have been a bit hectic since our last um...R/A that wasn't.  This has given me some time to think...I heard that " Oh God " people!  While I can't figure out so much the anger aspect of this entire chapter of the ongoing SAGA of Barney and Willie's Excellent Adventure ( not)  I think I've figured out the crying during sex, and the feeling that it was being done too me rather than with me.  None of this of course is Barney's fault.  The poor guy is yet again a victim of my poor past decisions I believe. 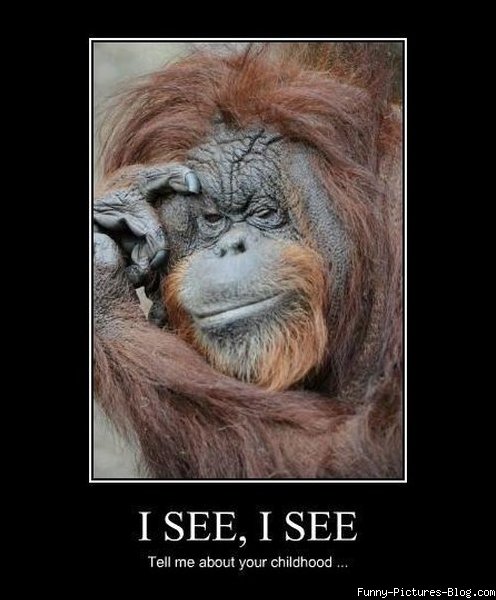 Disclaimer...this has been floating around in my head for a very long time.  I didn't go searching the 'net for Web MD and squeeze myself into this pretty little picture of dysfunction   Who knows next week I could think I was completely off of my rocker this week.

When I was a teenager,( feel free to click the little x at the top of the page, I won't blame you)  I made a poor decision.  A consensual, yet poor decision.  Not only did I make this poor decision, we got caught while acting upon it.  How did we know?  Well a camera flash in the bush isn't difficult to miss.  Being five foot nothing and my partner in crime 6 foot 3,  I was pretty much hidden from view.  WELL except that back in the day I wore pretty unique footwear...ahem.  He was the captain of the hockey team...(yeah I know so Canadian..and B-rated- Molly- Ringwald- type movie ish) so his last name was spay across his jersey.  Hey it was outside!!! Anyway NO denying who we were in the photo ( which to this day I have never seen).  It scares me for teenagers these days with instant messaging and face book...how quickly these things could spread.. As it was my final year of high school was marred by the knowledge that then entire senior class and anyone else who wanted to know...knew about my ....well my loss of virginity.  There were comments and snickers..but I handled that no problem.  I usually beat them at their game...except it wasn't fun.  It was a bit of a nerve racking year.  Even after the comments stopped I still wondered if they were looking at me.  My partner and crime could no longer be in the same room, let alone talk to each other without someone poking fun of us- we weren't dating.

Anyway.  I used to joke when people talk about their first time. I would bob my head back, saying that is what I remembered about it.  Sad isn't it.  If I could take it back I would, but I can't.  Things didn't get much better from there for a few years.  With the death of my Dad, and all sorts of things..well I"m not proud.  I mean I did have a couple of nice boyfriends, but I did have a few key boyfriends that turned out to be complete jerks.  I think I detached to get by....but I can't say for sure..I mean housewife over here not therapist.

The other day after my spanking and things moved on to a more fun way of reconnection...well things moved quickly.  I was still in my little nighty ( which btw I've never owned before.  I think I said I was a boxers and tank top girl, so typing nighty sounds weird...well it is a pink and brown leopard print at least..wink). So things moved along ...fast.  Then the tears started.  I felt like I wasn't there.  This has happened before in our marriage.  Without the tears AT the time.  I must state right here I do not mean this as a slight on Barney.  There was a very long time where I didn't feel 'part of the process' in my mind/heart.  I never let Barney know.

As usual I couldn't figure out the whole tears thing.  But I honestly didn't dwell on it.  Seriously I didn't.  I was too busy with my son who was recovering...( he's fine).  Last night a friend asked me a question, rather innocently, and all of this came flooding back into my mind.  I suppose it makes sense. I mean that little voice I talk about, it has always told me to say to Barney I don't like to be partially clothed when we have sex.  I like to be completely naked, and I like him to be too.  Sure there were times when were were first together and couldn't keep our hands off of each other that these thoughts never entered my mind.  However for a while now, I can't stand it.  I feel cheap.  Like any port in the storm.  I know this is not true with my husband, but all those feelings come rushing to me at the time.  I guess I might have figured out why.

Perhaps I am just grasping at straws.  I'm not sure.  It makes sense to me, for now.  Ttwd has brought so many feelings and memories to the surface.  It is all a bit much at times.  IT is certainly inconvient, and well frankly at times annoying.  Then again, maybe I'm more off balance than I thought I was. LOL.

Now for the anger.  I'm not sure.  I know I was okay right after the spanking, although I was in my own world that much I can tell you for sure.  Do the two have anything to do with each other?  I can't say.  I was raw and hurt.  Detatched.  I suppose it is possible that I went back to my old 'coping' ways of being angry instead of allowing my real feelings to come through. I have also heard about several stages of spanking, and perhaps I was left in the angry stage? 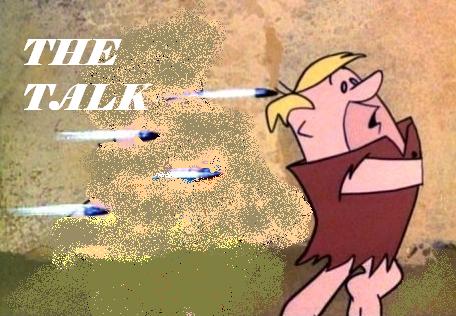 Okay so it didn't really go like this at all....but after the above 'stuff'  - well I didn't really want another " Oh Willie" comment section.

We did talk.  The beginning of the discussion, well the majority of the conversation was:  Barney talks.  Wilma silence.  Barney speaks.  Wilma " I don't understand what you mean by that" ( Turns out that even if you read the same post- you both take different things away from it - huh?  Imagine that! ) Barney talks...Wilma doodles.

Then it is Wilma's turn.  ...well....um...no, no accusations I swear.  But somehow the conversation became more passionate.  Here I was going to write a post about the two of us being 'beige' - not passionate.  Anyway, Barney left for a moment.  And I burst out in laughter.

" Oh trust me, I want to spank you often"

" It is just I don't always feel comfortable doing that..but I guess I'm going to have to start stepping outside of my comfort zone and just do it.  I think we need more maintenance sessions".

"Right.  You said twice a week before December and have yet to get to that even" ( poke. poke)

" Yeah I know.  But hopefully that will change"

Anyway.  We came up with a few 'solutions'....No sex right after Maintenance.  Barney was concerned about mixed signals initially....then after a bit of discussion, it might have come out that perhaps, on occasion he cut the session short...to get to the 'good stuff'.

We also discussed how after the 'incident' on Saturday night ( see previous post) how the thought of reestablishing his 'position' via R/A might have helped.  He said he honestly thought about it, but dismissed it because he thought it didn't seem fair.  The discussion of fairness in ttwd came up.  So that 'air' was cleared for the moment anyway.

During our Reconnection Appointment today, I was told to be honest.  After a LONG while he asked me if I was 'done'..(.I would have been if we didn't have that no sex rule).  " No"  and off we went again.  Eventually he 'had' to stop, with the promise that we would be revisiting 'this' later. 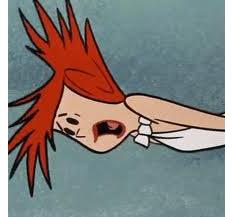 Don't get me wrong, neither one of us believes I can be spanked into submission, or into connection.  We are busy dealing with the distancing issue...and I was very close to what I perceived to be my 'breaking point'  but my white Irish/British bum had other ideas....sigh.  There was a definite 'crack' put into the wall today.

We will be practicing submission exercises.- Mostly for Barney's sake.  Yes I said that with a straight face and a clear conscience.

He also said that he has to remember to not let me distance for so long in the future.  He initially thought it was harsh to give me a time limit to 'figure' out was wrong.  I told him that there isn't always a revelation waiting in the wings.  The time also brings on irrational, anxiety girl.

Barney and I did discuss the sex/clothes issue.  The feeling of disconnect - naturally he felt it was his fault. I reassured him it was in me, and that I didn't know why at the time.  He assured me that he will do everything he can to help me through these times if they occur, but I also have to tell him in the moment if I feel it happening again. Apparently some of the details of 'the night' I  hadn't  told him.  Which means I didn't tell him about later 'bad' experiences I had.  I suppose I didn't tell him for two reasons 1) I didn't realize the weight these things had and 2) What guy wants to hear about experiences that his wife has had with other men (boys) ?  Of course the latter is somewhat silly because we were both actively dating other people for the first 2 years that we knew each other before we dated each other...so stands to reason right?

This week once again reminded me how much ttwd is just as much a personal journey as it is for couples.  The couples part comes in the sharing and communication, but there really is a great deal of 'figuring' and growing by oneself. At least that has been my experience so far.

Crumb...crumb... I forgot to mention..I will answer all those who commented on my last post tomorrow ..I promise!
at 7:34 PM