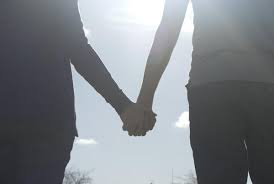 The weather was wonderful.  Sure there were a few clouds that peppered the blue sky, and they threatened to unite, but all in all it was sunny and warm.  We were walking together which was nice.  It was better than nice.  It felt right.  Finally one was not pulling the other forward or hold the other back.  We were walking hand in hand.  One patiently waiting while the other stopped to look more closely at something.

I had brought a back pack with me.  In it I still had a few things I needed in case of an emergency.  For the most part, Barney had convinced me to lay it down beside the water, as I didn't require those 'things' anymore.  If an emergency came up, he would handle it.  I still retained my light jacket.  I wasn't wearing it, but I did have it tied around my waist.  After all clouds did pepper the sky.

The sun kept my bare arms and legs warm.  His body sheltered me from the cool breeze coming off of the water.  I was loving every step of our adventure.  The clouds started to become more organized.  The sun was still shining, but I could feel a drop in the temperature ever so slightly.  I reached for my light 'shell'.  Barney told me there was no need to do it up.  Unfortunately once I 'catch' a chill it is difficult for me to get warm again.

Then it happened.  The clouds united and the sky opened up.  I stood frozen in my place.  A step behind was my back pack and 'emergency' supplies.  I waited.  I searched Barney's face for answers.  I had an umbrella of my own, but it was not as nice as the one he carried.  Barney's umbrella is big enough for two.  Mine only for me, and often my back still gets wet in a bad storm.

I waited.  I looked at his umbrella hoping he would pull me under it.  There was no time for communication, as the storm was fierce and loud.  The river bank had swelled and my feet were stuck.  It was too difficult to run to him.  I needed him to protect me from the pelting rain.  The offer of the umbrella never came.   I zipped up my shell, and reached behind me to retrieve my own umbrella from my back pack, I was told I didn't need.  I was not sure what unsettled me more, the fact that I waited until I was drenched to the skin before reaching for my own umbrella, or the fact that it was instinctively retrieved so quickly.

After the storm past, the sun did not return.  I was not only drenched to the bone, I was cold-shivering from the dampness that seemed to creep in.  Barney attempted a few times to get me to remove my shell because the it was holding in the cold.  I refused.  After all there was no sunshine in the sky to help dry me off.  What difference did it make?  I was very resentful that he didn't offer his umbrella.  If he had given me the protection I needed, I would not have been as wet.  My shell would have had a few drops, but my skin below would have still been warm from the earlier sunshine.

Others passing by on their own adventure suggested I take off my shell.  They said that even though the sun was not out at the moment the air was still warm.  I had no desire.  It was my jacket and I would take it off if/when I was ready.  Every once and a while I would let the zipper down a bit, but I was too afraid to expose my arms again.  What if the air really isn't that warm?  I also can't see the sun, what if it starts to pour rain again?  I have to protect myself from the elements.  I can't take off my jacket, just to have to reach for it again in a few minutes. It is not worth it.  The rain WILL come again, and I need protection.  If it has to be in the form of my pathetic jacket and small umbrella,so be it.  But it has to come from somewhere.  I need my back pack of things.  It would appear not just for emergencies.

I was shivering.  All I could hear was my chattering teeth.  I couldn't see because of the water running down my face.  I became resentful.  Not only because he didn't offer his umbrella, but after the fact he didn't move me away from the swollen river bed.  He left me there waiting for me to join him on dry land.  He didn't lead me away.  He left and waited to see if I would follow.  I didn't.  I couldn't.  For he wasn't leading he was he strolling.

A long time I stood there.  He was no longer in sight.  Resentment grew.  I knew someone had to lead.  Strolling isn't always an option in a family.  I could take the time to 'follow' someone who was zigzagging, trying to find a path but the rest of my family didn't have the luxury of time on their hands.  They need to be lead or they could get lost.

The problem is I hate leading.  I did alright but Barney was always a better map reader.  I can instinctively find my way but it doesn't mean that the people with me enjoy the trip.  I know I certainly didn't.  Resentment grew.  I seemed fixated on this fact, yet it didn't seem like quite the right 'fix' for the resentment.  I knew that Barney was going to take a while to chart the way.  He had already started.

Finally after standing alone, with the occasional 'check back' from my husband, my shell ,while still on, began to dry.  The shivering subsided.  The teeth stopped chattering.  It was then that I realized  I so wanted the protection of Barney's umbrella.  I have always wanted it.  Perhaps it hasn't always seemed that way.  During our 'adventure' he assured me I didn't need my own anymore,not if he was around.  In the past he had let many small showers, ( I shall call them Gazoo storm fronts) drench me.  So much so that I wore a jacket all the time.  A few years ago he allowed me to be pelted by rain off and on for over a year with another storm front,literally telling me I needed to find my own way out of the eye of the storm.   This storm  we just weathered was merely a minute shower, in the grand scheme of things, but one that threatens to keep circling back.  My heart aches that he didn't offer his umbrella until after the storm had blown through.  My mind has rationalized that if he can't or won't step over to cover me in a small storm, can I truly leave my back pack and my emergency supplies behind me?

I am aware of the saying April showers bring May flowers, and I have to trust that some day this will ring true for us.  I know that there will be many more storm fronts that come into our lives.  My hope is that the next time it will not only be this umbrella I see 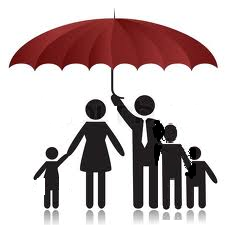 But this one I feel 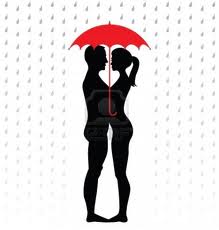