Creating Our Own Nightmares

Do you remember when you were younger and you had a nightmare?  I am not talking a really young child when you would climb into your parent's bed.  I mean when you were old enough to know that it was just a 'silly' dream, and there is nothing there in the dark that isn't there in the light. Perhaps your parent's still opened your door to check on you before they retired for the night.

I had lots of nightmares growing up. VERY active imagination even in sleep..lol.  Anyway, we lived in a bungalow and my room was at the end of an L shaped hallway.  My Dad would often turn on the hall light so he could 'see' in my room to check on me before he went to bed for the night.  Often I would have the first nightmare before he even went to bed.   I would lay there and listen to the goings on of the house and feel 'safe' knowing he was still awake.  I wouldn't get up though, because I was a 'big' girl now, and I could 'deal' with these irrational fears.  I would lay there, tears streaming down my face, scared, but also so angry at myself because I couldn't shake the scared feeling. 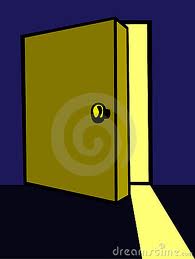 Before turing in for the night my Dad would open the door, and the light from the hall would shine a line across my bedroom floor, but he would never open the door wide enough to have the light hit my face- as a parent I know it was because he didn't want to disturb his Perfect Little Girl ( oh stuff it!  I was adorable!  lol).  Each time he did this after a nightmare, I prayed this would be the time that he opened the door just a little wider to see I was still awake and upset.  He never did.  It wasn't his fault. He thought I was fine.  How would he know I wasn't?
You know where I am going with this right? This has been me literally and figuratively in the past 2 weeks.  Last Friday night Barney and I did talk about my post Newbie Issues. (<- BTW Cat, thanks a million for teaching me how to do that!).  We talked about passive/aggressive temper tantrums.  How he noticed -  yay he notice !,( Hellen Keller could have picked up on that vibe last week).  So anyway, he said he planned to 'deal' with it...  Okay--- He didn't.

So Saturday, and Cook Together night was nice.  Nothing spectacular, but the earth can't move every week.  Talking on Friday night was good and it somewhat cleared the air, but it didn't strike a cord deep inside me.  I could still feel myself slipping away.  I should have really said something.  Instead,  this past weekI did most of the things I agreed to do when we started ttwd.  Actually not true, I did all the visual things I agreed to.  I dropped the aggressive part from last week's temper tantrum, and truth be told, I don't feel I was angry this week, I was just in-- suspended animation.

Yesterday was to be the only FULL day that Barney and I were going to have alone together for at least 2 weeks.  Anyone who is well versed in my blog posts knows, this raises a RED flag.  Wilma puts too much expectation on one day- whether it be ttwd, or just spending time together.  I had already had it in my mind that this day was not going to work out- rationalizing this thought process from past experiences.

I should have just put my big girl pants on and talked to Barney the night before and expressed my concerns/fears.  But why would you learn from your past mistakes ?  Wilma..pah!  It is so much  healthier for your relationship to set up a secret test that you are pretty sure your husband is going to fail.  I 'win'...he failed!  Soooooooooooooooooo not healthy.

I suppose you don't need me to tell you yesterday was messy.  A cold front moved through Bedrock.

I wanted to talk to Barney, only I didn't trust my words.  Some of the things that came to mind were not healthy.  I had to sort out my feelings-whether I wanted to say these things just to hurt him, or because I truly believed them.  I was so hoping the latter was not true.  Not that the former was much better.

I will spare you the messy details. I'll just give you the highlights so the HoHs out there can't yell at their computer screens...

I was sitting at the table/computer actively doing my 'favourite' activity of late, crying, when Barney approached.  HoH tone " I thought you were going to do_______ today?'.  ( btw it was done 2 days ago but whatever)
" Seriously?  I am sitting here CRYING and THAT is all you've got? " ( inserting earplugs so as not to hear you men yelling)

I decided to bail...up the stairs I went...with " Don't you walk away from me ( insert my real name)"--- he never uses my name..or a nickname really -EVER
Into our room I went, trying to slam the door- stupid over the door hanger grrrrr! He didn't follow...( oh test..and fail...my thoughts driving a bigger wedge between us)

He would come upstairs for somethings over the next hour, but no matter how hard I willed him to open our bedroom door, it didn't happen.  So I lay there " Big, stupid -poo-poo-head"  <- Okay I really didn't think those exact words, but trust me they were equally as 'mature'.

An hour later I emerged from our bedroom, no better off then when I went in.  More talk --
B- " I think you should go to the doctor and find out why you are not sleeping at night"

I believe there was a " Don't talk to me like I am an idiot "  Thrown in there.
and then THIS came flying out of my mouth...( hold on while I dive under the table to hide from you people)

" You need to figure out what YOU think is going to work for this marriage, because clearly every idea I have brought up in the past 5 months doesn't work for YOU!"

He did return, with a clearer mind I suppose.  He had some things to take care of at the bank.  He then found out a little something there, that I hadn't exactly told him about.  A weight I was still carrying on my own.  I was relieved that he had discovered it, and oddly I felt very 'submissive' after his discovery.

We decided to talk once the kids went to bed.  I had set up our bedroom with candles ( had to- I needed all the help in the lighting department I could get. I'm NOT a pretty crier). -Put on some soothing music-  laid out some food, and you guessed it -wine.  I then changed into what I wear to bed.  The mood was very conducive to talking, um, this night.

It was very awkward and difficult at the start.  Funny how we choose a mate for life. We agree to 'share' our DNA to create new life together, yet is so difficult to talk about our fears, needs,- feelings with them.
We discussed what needed to be done to keep us on track.


Maintenance is rearing it's head for good around here.  Barney feels that he needs the 'practice'..lol..and I know I need it to keep my head/heart where it is to supposed to be- where I WANT it to be. In addition with older kids and work schedules this is going to have to be around to keep things under control, for lack of a better term, as things can't always be dealt with ASAP.  Barney also feels this will help him

We discussed the ins and outs of spanking.- What was ineffective before, and what we both think might be solutions to these issues.  We have agreed it will be a work in progress on both our parts.

Sheesh what a day/week.  We have both agreed that the distancing, then pushing him to take action was destructive, and that we both played our part in this.  I have agreed to 'try' to refrain from this behaviour, and he has agreed to stop that behaviour in its tracks before it gains speed.

We feel closer again.  I feel more drawn to Barney's presence -. We are striving to make this work, and that is a HUGE relief! The  relief  comes from the fact that we have reassured each other we are  still going to roll the dice and aim for the ladder square!.