Someone ( foolishly *wink*) told me to 'blog like crazy' last weekend-- that is like saying, " So Wilma is there anything you'd like to add ? "  Ya best get comfy! LOL


Someone else also jinxed me and said I most likely wouldn't make the week without blogging- although, truth be told, I didn't believe  I would  either- but 24 hours would have been nice!

Now I am about to use an analogy- I know, the surprises NEVER stop with me!  Don't get your panties, whether they be thongs, ( although this would be difficult), boy shorts, granny, French cut, bikini, or Susie Specials in a bunch ( Did I miss any  Lillie ?) Oh sorry...boxers, briefs or boxer briefs...(speedo-type guys...move along...I Kid. sorta)- for you men out there! I KNOW  this is NOT a GAME and there is NO finishing POINT...Phew, now that I have you in the right mind set....off we go.

Snakes and Ladders (or Chutes and Ladders) is an ancient Indian board game regarded today as a worldwide classic.[1] It is played between two or more players on a gameboard having numbered, gridded squares. A number of "ladders" and "snakes" (or "chutes") are pictured on the board, each connecting two specific board squares. The object of the game is to navigate one's game piece from the start (bottom square) to the finish (top square), helped or hindered by ladders and snakes, respectively. The historic version had root in morality lessons, where a player's progression up the board represented a life journey complicated by virtues (ladders) and vices (snakes). 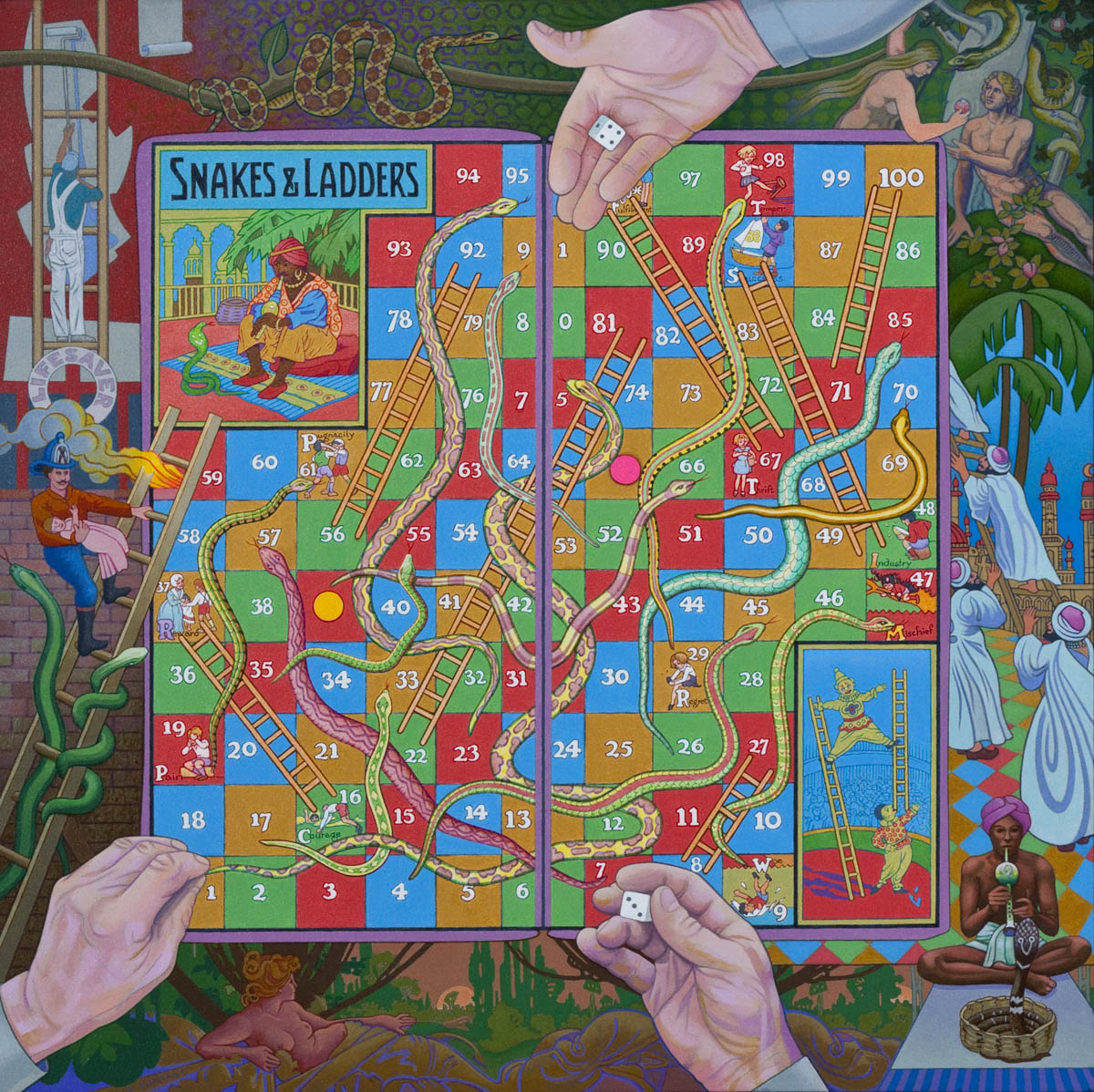 Truly the analogy can be applied to anyone's life.  Pretty sure the ancient Indians were not creating it with  the struggles of the Dd lifestyle in mind.

Starting off ttwd begins with 'safe' squares.  No snakes or chutes to send you back to the start.  And usually the first encounter you have is a ladder to bring you up to new heights.  The view is great, and you like it a lot!  You continue to roll the dice and often for a few squares the view remains the same.  You are okay with that.  I mean, the upward climb was fun, but you can't expect to keep up at that rate.  You step over a few snake bodies and continue on.  Then it happens, you land on a square with a snake/chute....sliding down.  Now the closer you are to the beginning of the game, the more likely the snakes/chutes will bring you closer to the start again.  However, the longer you play the further away you get from the start even when you land on a snake/chute.

Now AGAIN  I know there is no completion to ttwd, and it is not a game, but what can I say?  I think in pictures.  I chose the above painting for a reason.  First off the amount of snakes, and secondly the amount of hands playing the game.  I have begun to realize,  yes,  just really begun - slow learner over here-  that there are many players in my Snakes and Ladders game. - the kids, my external family, my friends, Barney's work, hormones, illness, - life in general.  (Boy, we are going to need more game pieces!) and many snakes.  The ladders are high and bring both Barney and myself to places on the board we haven't seen in a very long time.  Some ladders bring us to places we have never been to.  That being said, when I/we land on a snake and slide backwards, even a small snake, it is very disappointing.  We miss the view from above.  At least we can usually see where we came from, and keep rolling the dice to get back there again.  Sometimes though, I can't even see Barney's game piece on the board, and I am certain that he feels the same way about mine.  Just like in the game, we very rarely have the chance to climb  at the same time.  Unlike in the game, when one hits a snake, it is not long before the other does too.  Usually it is I that hits the snake first, most likely because I took the first turn to roll the dice at the beginning of ttwd.

This past week or so, I find I have been landing on all kinds of snakes.  They are only of the short variety, yet if you hit enough of them they set you back the same as if you landed on a long one.  At least when you land on a longer snake it is over and done with in one turn. The disappointment is instant.  The constant roll of the dice that has you landing on shorter snakes is so frustrating to the player.

I still plug on and will continue to roll the dice, in hopes of getting to a square with the ladder on it again. I will look for Barney's game piece ( oh...hey that sounds naughty) on the board.  I have to learn to hand him the dice and let him roll.  Perhaps he'll hit the ladder square and bring me with him :)
at 12:30 PM