I am an emotional sponge.  I always have been.  Barney and I were discussing this a few weeks ago.  I believe the conversation went something like this,

" Empathy is one thing, but this is a bit much" ( no he's not a cold fish, that quote was actually from me, he said something much kinder than that before my comment).

Perhaps it would be better to think of emotions of the people around me like a tornado, ( sorry Lillie for using that reference) and I inevitably get sucked in.  No matter how hard I try, their emotions become my emotions.  Aside from anger I was very good at shoving this down in the past<- again  I feel the need for a disclaimer, NOT HEALTHY.  I know many of you have applied this technique in your past too, perhaps some of you are still doing that.

Yesterday afternoon I received a phone call from a friend, ( for those of you following the Never Ending Saga of Wilma's life, the friend was Roseanne) She began the conversation off asking me about where to purchase a certain item.  I had noticed on the phone that she was calling from home.  The item in question could be purchased anywhere, so the question seemed odd. I didn't answer her question initially, I asked her if she was alright, why she was home during the day on a Thursday?  It turns out her father had passed away on Tuesday.  We knew it was coming.  That doesn't make it any easier though.  I've only met her father once I think, he was diagnosed with Alzheimer's soon after we met.  In truth, she lost her father well over 2 years ago.

I told her I had what she was looking for at my house, and not to bother to go to the store.  Barney said he'd drop it off at their place on his way to work.  This was the catalyst for my current state, at least I think it was.  Who knows? I swear I think Dd has driven me, insane,( arguably NOT a long drive).  Emotionally speaking anyway. Grrr.  So my current state of mind/ emotions are not directly related to ttwd- meaning it isn't an issue between Barney and myself.  It is just Wacky Weepy Wilma..sigh.

Throughout the day I kept thinking of Roseanne.  Everyone will tell her it is for the best. That he is no longer suffering.  That he was gone from her years ago.  Truth be told though, she can no longer reach out and touch him.  Yes, often when she came back from visiting him, she was very upset.  Out of sight out of mind, I suppose.  She thought of not going sometimes, because he didn't even know she was there anymore.  I would ask her if something were to happen tomorrow, would she be okay with that decision.  Her answer was always no - until two weeks ago that is.

Roseanne and her husband have moved out of our neighbourhood.  They used to live a stones throw away from my house. My youngest was practically adopted by them.  When Roseanne's brother died, I whipped into Wilma mode with cooking and cleaning and tying ties, anything that needed to be done I did.  Things have changed since then, and I feel sort of useless.

Here's the thing though, I feel guilty.  I have never minded funerals. I know that sounds horrible, but in some way they are cathartic.  After my Dad died, it gave me an 'excuse' to shed a few tears, and no one even batted an eye.  Yesterday the tears were there most of the day.  For me.  For my loss.  I thought of Roseanne not being able to touch her Dad, but I think I was just trying to make myself feel like a good friend.  I think I was, no I know I am missing my Dad so terribly right now.  Christmas is coming up, a bitter sweet time.  I usually push, push, push, down those emotions- now this ttwd won't allow that- most times

So for most of the day I was in this fragile emotional state.  Unfortunately I allowed it to take over a few other areas.  I stayed 30 minutes longer on the computer then I was supposed to...sigh.  It isn't a huge deal at the moment for Barney, but it doesn't help my submissive state of being to blatantly break a rule. I manipulated a few things so they didn't have to get done on the list ( one which I create keep in mind).

I checked the mail later than normal yesterday.  In it was a letter from The Heir Apparent's high school.  This is the time of year that we get progress reports.  It is usually very frustrating for us because our son as an IEP ( individual education plan)  there are certain concessions made for him because of his dyslexia.  Nothing major, aside from the fact that he is entitled to a Board provided computer with voice software, a little extra time on tests.  He is supposed to have his tests and work sheets printed on coloured paper because he, ( thanks to his funky momma) has what is called Irlen syndrome/Scotopic Sensitivity .  Yes Wilma your DNA is the gift that keeps on giving! Anyway because of the way things go, teachers aren't able to get around to IEP and the computers aren't usually given out until mid October...so you can see how these initial reports are difficult to interpret for us.

I knew I shouldn't do it.  I knew I shouldn't open the envelope.  I knew Barney would be home in a few hours, and we could read it together.  HOWEVER, Heir Apparent's education IEP stuff has always been my department- being the resident dyslexia expert and DNA provider of all things funky. So in my shaky at best state of mind, I read through the mountain of paperwork.  Blah, blah, blah, not handed in, ( probably in the bottom of his school bag) etc..nothing new. EXCEPT...whoa what is THIS?  Disruptive?  Holy h*ll! OH I DON"T THINK SO.  Here's the thing, we have 3 boys, and for whatever reason, they have never hung off the rafters.  They have always been street angels, respectful of others ( outside of our house, and most of the time inside too).  NEVER have we received anything to do with behaviour. Who was this kid?    To add to it, this note came from his history teacher.  History is his favourite class.  The kid is a walking encyclopedia.  For those who aren't familiar with us 'learning disability people'  we generally have one area where we are exceptionally off the charts compared to others.  Some people are exceptional athletes ( pretty sure you know I don't fit into THAT category), others number crunchers...( nope not me again or the Heir Apparent either).  Anyway he is all about history and facts, and dates..etc.  Life with the History Channel and Discovery Channel has been good to him, as he is an Auditory learner. So what the heck?

At Thanksgiving we were having our usually history that turned into world issues conversation at the table, (well I was trying to talk turkey, literally with my 10 year old, as Barney and Heir Apparent were chatting) when Heir Apparent was boasting how he bested the history teacher that week.  ARGH.  I respectfully reminded him that although we were proud of the fact that he is very knowledgeable in history that it is never nice or a good idea to embarrass someone ESPECIALLY YOUR TEACHER in front of a group- or anywhere really.  (He claims that is where the teachers comment originated from. This incident.)

Again, I should have stopped.  I should have just waited, but I didn't.  I approached Heir Apparent.  I remained calm, but I am beginning to realize that the teenage brain always feels like a discussion is an attack.  Righto Wilma, stay calm.  I did.  He didn't. It got out of control. In short I was sucked into his emotional tornado.  I wanted Barney home ASAP, although that wasn't going to happen.   Eventually Heir Apparent threw this gem my way.

I was hit ( not literally).  Deeply wounded, then it got worse.  I won't elaborate, but it wasn't pretty.  He went for a walk.  I , well I suppose you know what I did.

As I sat in my empty living room with Heir Apparent cruising the neighbourhood, the tears began, but then I felt the switch track click.  Old habits die hard. I was attempting to move the direction of the emotional train to Numbville.  Mini victory- I clicked the switch again before the train got off course.

Barney came home late. I was still up.  Thankfully I was distracted by a blogger friend ( *wink* you know who you are and you were such a welcome distraction, even if I feel I stayed up too late talking last night, yawn).  On the verge of tears again, I told him I wasn't having a good day.  He read the reports and had a very similar reaction.  So he had to process, which means he couldn't, at the time deal with me as he had to deal with his own anger/disappointment.  I kinda just flapped in the breeze for a while.  It's okay, he had to have time. In bed I fell asleep in his arms.

This morning Heir Apparent was normal.  Well as normal as a 15 year old boy can be ( sigh I miss my little boy sometimes). I on the other hand- not so much.

I am distracted, unfocused, weepy, weepy, weepy.  I normally have my meals planned out for the following week done by Thursday night, today I had the days written down, but nothing beside them.  Barney held me, as I cried.  He said that I didn't have to do A, B. or C if I didn't feel up to it.  I told him, I didn't think not doing stuff was a good idea.  Later he came to me and said,

" I think you probably need a reset -don't you?'

Only that didn't happen.  Although I don't hurt anymore, the bruising looks its worst because it is old I guess.  Dunno...never paid as much attention to bruises ( most times I don't even know how I got them- ah dyslexia and your spacial issues) as I have this week- then again, Barney didn't either! lol

He said when he talked to Roseanne yesterday, the first thing she said was " Wilma doesn't have to go come on Saturday you know" ( her father's funeral is about 45 minutes away) Which to me says more than anything she really wants me there.  And I will go because it is the right thing to do, I'm just afraid of the amount of tears that are going to be shed.  At the moment I feel very raw, actually I feel like an open wound.  I so desperately want to cover it up, but I know that is not what has to be done.  It has to be left in the open to dry and heal.

Yesterday I felt my balloon deflate.  Not pop, so there is hope- it can still be re inflated ! 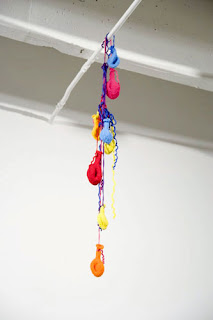 ( Personally, I think they still look pretty like this too...just not as showy)

Barney expressed that he wished he could go tomorrow to be with me, but he is working.  I'll get through it. Perhaps a band aid --just for those few hours?