Anxiety Girl Spanked to the Curb !

Not too long ago Cat at Giggles and Reflections had yet another funny post ( which you can read by clicking on her blog name- by the way Cat also taught me how to do that!  Thanks Cat). I joked that I didn't recognize myself in any of the little pictures she had posted there- I don't think I fooled her.  Anyway, I stole this little ditty to explain how I  WAS,  (yes, was fear not this is not another Weepy Willie Post) after my last post. 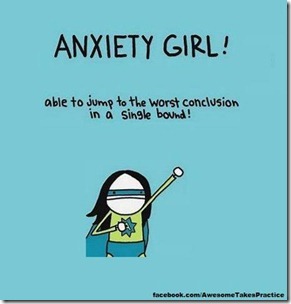 Oh I see you all out there throwing your hands up in the air in frustration.  Yelling at your computer screens,  " Great another freakin' persona !  Ethel get the Venn diagram out, Willie's added another character !"  And to you I say FEAR not.  Oh yes I was definitely Anxiety Girl.  Her and I go waaaaay back, but she ususally arrives monthly and she's is about as welcome as her travel companion.  THIS time she came alone.

If one wanted to delve into the why Anxiety Girl chose to visit twice in one month,one could chalk up her visit to the holidays...but I don't think so ( and you know I have given this a lot of thought).  Perhaps the anxiety slipped in when I left myself numb from the weekend.  Good news-  at least I was feeling again?

Well let's just say that Barney made sure I was feeling SOMETHING  again.  Yes, yes, this is the spanking part....I'll take a moment while my 'friends' whop an holler .  Alright hate to cut some of your parting short, as this was Maintenance. Not punishment.  Did you notice I didn't say target practice, or tan your titanium toosh? M.A.I.N.T.E.N.A.N.C.E.

Barney read my blog this morning...three times- see Bas you are not the only one, must be an HoH thing.  We had a discussion before our session.  For some unknown reason this week I was nervous.  I almost decided to call the whole thing off- like the WHOLE thing off.. For one fleeting second, I thought I can't do this.  I can't for the life of me tell you why that was. Well perhaps that was Anxiety Girl trash talking in my ear.

We lay on our bed and talked before hand.  Well Barney talked.  He talked about my last blog post, and how he noticed what was happening with me.  He mentioned how we both knew that it was most likely going to be a snow day the day before- so he didn't consider it a cancelled maintenance day.  Once again he brought up wrapping his head around actual punishment.  He is trying to figure out how he is supposed to be feeling when he does administer it.  That is his thought process at the moment.

The mistake I made last week that he had to fix did indeed make him angry, he told me. There was no point, in his mind expressing that anger toward me as it was an honest, careless, but honest mistake- and that I was taking it far harder than he thought I should.( I hear your sighs).  The conversation continued around future punishment and that he is getting more comfortable with the idea, but is never really angry AT me. He is  more frustrated with me. ( See- I still think I can use that as evidence that I am an angel).

He wanted to clarify that when he said I was doing much better this holiday season than last, he didn't mean I was unbearable last year, but I don't seem as stressed.  He attributes that to me letting him in since we started ttwd- to us COMMUNICATING even when it is difficult, and I don't want to, like last week.

Ooops sorry I guess THIS is the spanking part.  OTB I went.  I don't remember a great deal about what was said this time.  But it must have been better because I wasn't thinking my own lecture in my head.  Did I giggle?  Well I bit my tongue at one point so as not too because Barney once again said " Man I really have to start working out". 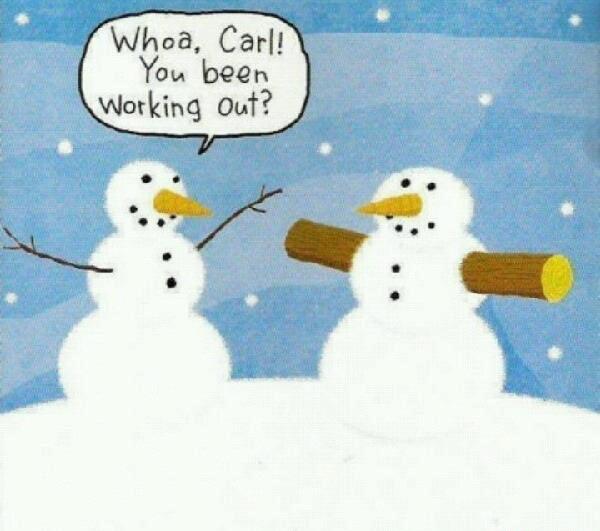 Thanks to Lucy for sending this to me!

Before our lecture we talked about how I was going to be spanked.  I mentioned the speed thing again- and THIS time he was faster.  That really did help.  So faster hand, then the belt...more conversation...Harder, faster belt.  ( let me clarify by conversation- I mean he asked me, and I was honest- I was not telling him how to )  He then went back to his hand...that hurt.  I think the switching up of implements helps so that my brain doesn't get used to one and settle in a safe zone.  He then said something about that blasted silicone spatula( which is actually a spreader).  Okay THAT got my attention.  You see I have only ever been spanked once for punishment, at the start of ttwd, for not following my food journal and exercising, and he brought this out ( which I had stupidly purchased). 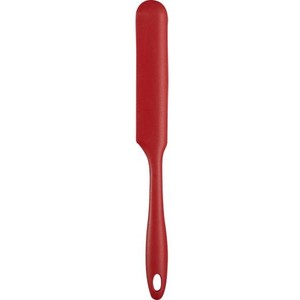 Now we were new to ttwd at the time- NEWER I should state, and there was no warm up.  This sucker is KILLER.  By swat number 3 I couldn't hold position anymore.  So after a LONG time with a belt, I wasn't looking forward to this.  I casually mentioned how much that hurt and that he had mentioned it for punishments only.  Thank God he agreed and moved on to a wooden spatula that is like a paddle but ligher.  The 'paddle' was beginning to do its thing in combination with the previous implements ( oh there was a plastic thing in there too).  Not too long after I was curling my toes and grasping at the duvet.  I could see the  break through on the horizon.   As I started to squirm, Barney stopped.

I am not upset with Barney, you seriously have no idea how many swings the poor man took today.  I know he's not keen on seeing me in pain, so I think once I started to grab the duvet and didn't break, he was worried  how much more it was going to take and stopped.

Although I didn't grab what I thought I wanted from this spanking, I did gain something very important.  I regained myself.  I have no idea how it works or why it works, but it did.  I am completely reset- Anxiety Girl vanished.  Before Maintenance today I was going to send an email to someone ( not Dd related) and I thought, I should really wait until after my spanking today and see if that is how I want to proceed.  I never wrote the email..I am still thinking about email conversations between myself and this person, but I no longer feel anxious about it.

Do I feel more submissive?  Um I actually hadn't felt overly NON submissive ( again zip it...you know who you are) this week.  Perhaps that is what this 'break through " will mean if I am able to cross the threshold.  I want to be able to feel like I need to climb on my husbands lap after- for me, not just for him.  Who knows?  Maybe that is not  even in my make up- but as I type today 12 hours later on a still very sore bum, I am grateful for the reset!

I saw a difference in Barney during and after my spanking marathon today.  He was determined, and not shaken up.  Good for him, and myself today-
I hear bad for me later :)