For the past few days I have been in an emotional fog.  I had something I realized that I need to talk to Barney about.  It was something I have known about for a very long time, but it was very difficult to tell him.  I also realized that I needed to tell him because I felt that knowing something about myself that I wasn't sharing with my husband was  potentially staling ttwd.  Now the subject matter wouldn't seem surprising to some, but the issue with me NOT  telling him meant that I wasn't completely open with my husband and is that not the point of this journey ?-  To be open and to be vulnerable.  To be true to one's self and to our partners?  I will post about the ins and outs of this issue later, once we've talked about it more.

So yes I told him, no it didn't go well..or maybe the way I had hoped.  I'm not entirely sure what I expected, but the end result- I felt hurt.  As anyone who practices ttwd can attest to, emotions run high.  This was especially difficult because I felt as if I had laid my self out in my entirety now to my husband and he didn't know what to do or say, thus resulting in my fog.

Alright  enough about that as I am planning on a separate post on the reveal later. The reveal's after effects are what is important here.  I ended up spiralling and --- you know what, let's just say this has been me for three days 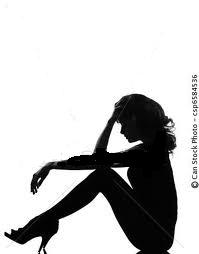 Clearly, as you can tell by my footwear, I have just vacuuming, but you get the  general idea.

Flash forward to this morning.  Today was Role Affirmation day, which I personally find an unusal title as there isn't any Role to Affirm as of yet.  Perhaps we should call it Target Practice Tuesday, or Teflon Girl gets Tanned, or in Barney's words "Titanium Butt " gets Tickled ? Today's implement of choice, the rubber strap thing.  Now I will admit the thing does carry a sting--Ooops jumping ahead again

During my warm up with his hand, Barney and I were talking- well not a full fledged conversation.  It was decided/reminded that perhaps if he had something he wanted to say that I might keep my head more in the game.  He decided on something along these lines...

* I want you to stop worrying about other people, what they say, what they write, how they feel,  how they interpret you...you have no control over this and you worry too much and it makes you miserable. You have to stop. I hate seeing you like this*

Okay, that got me crying...the lecture stopped there, but the warm up didn't.. Once the words stopped so did the tears.
Several minutes later I got a severe case of the giggles.

" Now what?  What is so funny?" chuckling himself, with a few sighs in there.

" I was just thinking of a discussion I was having with_________ the other day,about spankings"

" We were talking about the speed of the Role Affirmation spanking, and I said something like, --'It is as if Barney goes  Smack ,One Mississippi, Smack  Two Mississippi, "

Out came the strap. Whacking...whacking...talking a bit.

I understand, that the talking thing is probably more difficult than the spanking thing and to do both together must be very difficult.  I mean that sincerely. Not in the he can't walk and chew gum kind of way.

As Barney put it later, talking manipulates the situation to bring me to where the spanking is beneficial.  He also said that talking is not his strong suit.  So if anyone out there wants to do a post on 'the lecture' we'd appreciate it - because my mind was still not in the game.  I tried so very hard to concentrate and remember why I was there and what we were trying to accomplish, but without the words from Barney, it is hard.

After a good while, and more comments about beating me with a feather, even though my bum did not looking like that from his vantage point, he said

The rubber strap thing packs a sting, but it doesn't last..just a TMI FYI.

It has been decided that Role Affirmation will now take place 2 times a week..because apparently _I_ need it...pfft.  and that next time the old belt will be brought out, and no more OTK, after the warm up.  Perhaps.

Don't get too excited, he's not actually going to BLOG, but more comment on blogs now.  He has his own Blogger ID and some of you may have noticed he is following you ....dun dun dun...If he isn't yet, it is because he just started and he is primarily focusing on sites, at the moment, that have the HoH point of view from time to time.   He was more than happy about obtaining his blogger ID because, as he said