Ask and you SHALL Receive

Life has been going along here, as usual  whatever the heck that means.  I suppose I should actually say that nothing too exciting has been happening in my life.  No earth shattering breakthroughs or anything like that.  There have been the odd 'playful' arguments between Barney and I, some of which have had some fellow Dd wives either howling with laughter or saying , " YOU SAID THAT ?" .  Naturally the next day I thought I better bring it up with my HoH to see what he really thought about it.  Not second guessing him, just asking him if he found any of it to be disrespectful at all.  Turns out , no.  PHEW.

I have been getting a little more um, feisty.  Not disrespectful, ( remember I asked ) but playful.  The thing is.... this morning, after doing my usually Mother-Morning-Marathon, with Second in Line to the Throne, I started to think...( sorry Cat I really tried not too ).  Sure my words and tone were playful, and teasing, but there was something brewing underneath.


Have you ever been camping and used one of those older coffee percolators?    They look like this 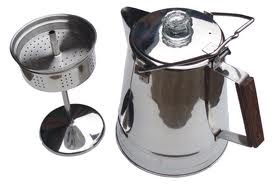 Okay, actually ours is not as nice as this, but you get the general idea.  For those who don't know, you place your coffee in the basket on the left, place it in the pot,  filling it with as much water as you need.  You then place the entire pot over a heat source and as the water boils it goes through the basket ( filter) and starts to create your coffee.  The glass knob at the top is your tiny window that allows you to 'see' the colour of the coffee, ie how strong it is.  When it first starts to boil, the colour is very light, and continues to darken.  We have had it however, where we've left it too long,( man those camp stoves are HOT ). The constantly, rabid boil of the water, moves the filter resulting in coffee grinds in the coffee  ...blech!

Right then, yet ANOTHER  Wilma analogy.  I could feel a little boil on the go.  I wasn't angry at all.  I couldn't quite put my finger on it really- the emotion.  I just  knew that I was 'off '.  I didn't want to end up boiling so much that my 'coffee' was too strong.  I certainly didn't want grinds either!

I knew that Barney and myself had made a bit of progress last week with our punishment session, and I desperately wanted to hold on to that ground.  I was afraid that if I let this 'unsettled' feeling brew and boil it might get  to a spot where sassy and playful had an edge.  If I was not reeled back in I might loose respect . - I had decided I should speak with Barney after the other two boys went to school.  He asked me what I needed to talk to him about - I told him I honestly wasn't sure.

LIFE however got in the way.  The LIFE  Barney and I created together actually.  Teenagers!  That is all I am really going to say about that!  So now my emotions have kicked over the stupid coffee pot, although, oddly still not angry, now anxious, my stomach upset, weepy...and well lets face it sassy isn't known to lay dormant within the confines of Wilma for more than ...well  ever really.  F-A-N-T-A-S-T-I-C !  After figuring out a plan of action together Barney asked me if I still wanted to talk.  I said yes, but not quite at that moment.

About half an hour later, I found Barney in our bedroom, making our bed ( hey, last one out...and seeing how sleep and I have essentially parted ways, it is usually not my 'job' ) .  Without a word, I handed him this 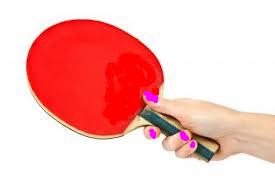 He took it from me, took me in his arms and I buried my face in his neck.  He then quietly asked

Without looking up I nodded into his neck.  He pushed my back a bit and looked me in the eyes.

" Okay" and pulled me back into a hug once more.

About a minute later he spoke again, not moving me this time,

He led me over to our bed, and we started our 'usual' <- ( like you're  veterans at this or something Wilma? ) routine.  During my warm up he told me to make sure I told him if I was hurting too much- if I honestly couldn't take anymore ( he's still concerned about my skin ).  I reassured him I was fine now.  He began to speak after a few minutes..

" Thank you for coming to me when you realized you needed help.  I was going to talk to you about your maintenance this week, but if  ever you need something before our scheduled session, I want you to come and talk to me- like today........  Are you okay?"

During the ping pong paddle session, I began to laugh ( I know).  He wanted to know what was funny THIS time.

" I'm sorry, but the neighbours are going to think you are building something over here, not spanking your wife.  It sounds like your hammering in a nail"

This resulted in a couple of chuckles and rapid fire...lol  and more ouch.

Once he decided that this could no longer continue, he stopped and asked.

" I honestly don't know.  I think this may take time again. "  ( censored activity )

We had a ton of things to get done today.  Barney asked if I had a preference in which order we wanted to do this.  I said something I have been wanting for weeks.  Something so simple. Something that people do all the time, but something we haven't done in forever.

" Can we lay on the couch and watch a movie together"

So that is how we spent our afternoon. Things will get done tomorrow.

I'll be forever sassy- that I have no doubt...but the edge is gone-for now.  The issue with the 'boy' is still looming, and in all honesty is going to be an ongoing challenge. Did I say teenagers grrrrrrrrrrrr...yet? The anxiety, weepiness, and  the upset stomach are gone.