* A great deal of this post is told through a conversation between myself and another merely because I was too lazy/busy to reword it all in story format.  Sorry for that*

This past weekend was the first weekend Barney has not had to work for a very long time.  Due to life and other 'fun' things, we haven't connected on any physical level for the longest time since starting ttwd.  There also had been no Reconnection Appointments since he decided to clear the air after Wilma Left the Building.

We were invited out to dinner to our friends house ( Dan and Roseanne those who are interested how far things have come since October).  Saturday we lazed around.  We finally decided to go shopping, admittedly not a man's favourite past time, but we were buying birthday gifts and we went to a store where there was deliciously hilarious and naughty things!  So it was shockingly fun...yes even for me...and that was pretty much the end of our fun for the weekend.  We went to dinner...I had a nice time  ---..Barney ? ---...well I'd rather not get into it...but suffice to say the rest of the weekend was more like this

( without the happy face on Wilma) 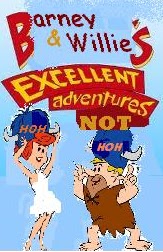 We eventually talked and things were swept under the carpet worked out.  Because of said 'adventure', no reconnection on his days off either!

Skip ahead to the train wreck Reconnection Day.  Which could have been Monday, but Barney was called in to work.  So I wrote my Addicted to Crack post, mostly to put a smile on some faces, but the last line was more of a wake up call to my HoH.  I have begun to accept that I shouldn't expect things, and if they happen, great.  Things were getting desperate here though.  Not poking the bear...but Distancing Debbie,  in her lovely yellow sports car  was parked out front of my house, honk, honk, honking her horn.  Anywho...

" I want to talk first if that is alright?"

So that is what we did.  I explained how I felt we were going too long without some sort of connection.  I described how the past weekend made me feel.  How I didn't feel safe and protected.  That I had to be the one in charge.  I hated it..but it was far too simple to slip that HoH hat back on. Once again we talked about R/A when the kids are in the house.  Once again we talked about implements, and decided that during today's R/A that some quieter ones would be tried, as well as different approaches to warm up that may be quieter, ( hand spanking over nighty.) .

After our Reconnection Appointment..we had a reconnectoin of another type.  Only for the first time in a very long time I felt that this was something that was happening to me, not with me

The tears started to flow.  ( I swear if I knew how many tears would be expelled in this lovely adventure we embarked upon back in October.......well anyway).  Barney tried to console me?  I mean at this point I wasn't even sure what I was feeling. 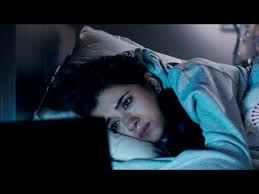 Poor guy.  I would imagine it took the wind out of his sails.  Moments earlier he was having a great time.  I didn't know what I was feeling or what to say, so I said just that...well sort of,but he understood. He made me promise to come to him once I could figure out what was wrong.

I finally went to Barney and said,

" I don't think the spanking worked" ( reconnection wise..and well for another reason to follow)

To which he responded

A while later I found myself seeking help from a friend.  Somewhere from the bedroom to the basement, I went from weepy to angry.  Very angry. ( Odd really because just last week I had said to another friend, that it has been a while since anger was my default reaction.  I meant that I no longer went from hurt to anger in a blink of an eye as a coping mechanism.  I suppose that would explain the increased tears.  Although I honestly didn't think that was humanly possible.)   On this day my friend patiently listened, as always. She then said she would go back to her husband and explain how I felt disconnected because we hadn't connected in 2 week and perhaps one spanking and a lovemaking episode might not cut it.  To reach me.  What really struck a cord with me was the fact that she said he is probably frustrated because he couldn't reach me and he feels it is his fault.

I once again battled the war within and found my husband.  He held me in the kitchen, but my arms were between our bodies.  I was not the melty wifey that is for sure.  I explained to him as best I could.  Once again I left angry....here is exactly what I typed to my friend after THIS exchange

me: Okaaaaaay then...that didn't go well at all :(
Friend: sorry
me: well...at the moment..I'm thinking he's clueless....argh..Okay I admit that is neither nice nor helpful..but it is honest :)
Friend: yup.

Does he need to do some "man processing"?
me: I said...lol
( friends name) said.....she thinks...blah, blah blah...too long without intimacy perhaps and spanking too
I didn't word it like that
trust me

ME He was leaving for work and said..." Well we can talk tonight when I get home"
I said " About what?"
"I am confused. You seem to be angry"


I said..."Why would you be confused about that? I already TOLD you I was angry" 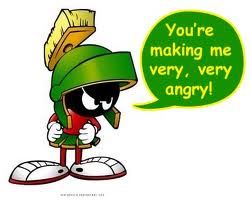 
he said..." Well we don't have to wait until Friday if that is helpful"
SIGH


Friend: I'm honestly trying to not grin at you!
me: lol
I'm sorry?
Friend: When the two of you get a little fire in your bellies you get something done!

me: great...now we are going to be the fighting couple...perfect!
lol
Friend: Nah.
Just when needed.

Anyway, that was Tuesday.  We didn't talk last night as he came home too late.  We didn't talk about it ...whatever the heck 'it' is today because our son had a 'procedure' done this morning and I had to be near his side for several hours..actually I'm not sure why we didn't talk then, as our son was 'out'.

I can tell you that I still have this ridiculous anger in me ...and for WHAT stupid reason ?  I never have anger like this.  It makes no sense to me what so ever.  I don't feel it towards the boys or inanimate objects, just Barney.

I seriously think I'm going to come up with a distancing scale so I can just scream tell a number to Barney and let him how far I am away from him at the moment...

I Wilmafied this pain scale one... 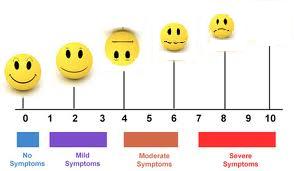 Has anyone else had this happen?  Suggestions?  Because I'm not sure what good communication is doing at the moment. Well you may argue that we actually aren't communicating ...but ...  I seriously can't figure this one out.