Yup...I've completely gone insane. That is the only logical explanation.  I think perhaps the insanity gene, much like a blood clot, was lodged somewhere in my posterior and when I was spanked, it became dislodged and ended in its rightful spot ( don't say it was already in my brain when it was in my bum) in my brain.

I'll back it up a bit for you.  Yesterday after 'the event'  I did finally turn into Barney and he held me for a bit. A tear or two may have fallen.  Suddenly there was someone at the front door.  I was about to type,* here I was trying to be vulnerable<- interesting isn't it- we'll come back to that in a bit*- here I was half naked, generating more heat from my buns than an Easy Bake Oven, encased in his embrace and he decides he might want to answer the door ?  To say I was upset might be a tad understating it.  So I mentioned, through tight teeth, " who cares who's at the door- probably for the kids anyway ",  all the while thinking, 'oh sure if this was foreplay you wouldn't have even HEARD the bloody door bell'.

After maintenance, I usually stay on my stomach for a bit and he rubs my back, then I basically redress- if that is the way things are playing out that day.  This time, I lay there for a while, stray tears appearing, and then eventually turned into him.  I wanted to be there.  I really did, but something was there with me too.  Eventually I went and finished my blog post.

One of the many lovely ladies who checked up on me offered me the advice of patience. No not until next time-  I believe she said something like " sometimes the head takes a while to catch up to the bum".  She was right. I hadn't really built a wall like I feared.  I had 'merely' closed the curtains on this little production.

About an hour or so later,  I could feel the curtain opening, but I knew Barney had to go pick up the boys.  When he left, I went to nap, I was so exhausted.  I dozed for 20 minutes or so.  When Barney returned I wanted to climb inside his skin.  I couldn't get close enough.  Things seemed better then. I realized earlier that I was trying to be vulnerable, but I was unwilling at the same time to give myself completely over to my feelings.  Perhaps I was still in a physical pain-blocking mode.

As the night progressed, we awkwardly stumbled around some issues we were trying to clarify.  We lightly chatted about other issues, but it was unusual for us.  I could feel my emotions near the surface.  ALL of them.  What the heck was the matter with me?  I decided to COMMUNICATE this to my husband,

" I don't know what is wrong with me?  It is like all of my emotions are perched on the head of a pin, and at anytime one of them is going to fall off and explode out' <-  my analogies in my emotional state clearly need work!

" Sometimes, but it is all of my emotions.  It is the weirdest thing"

Okay so I can totally understand that.  He must have already felt in  foreign territory himself .  Then he mentioned something about understanding about my age, and hormones. I couldn't help myself, I burst out laughing. Like really laughing.  Snorting and everything! After about a minute, he said,

" Can't we just have a normal conversation?"

The laughter died, the incredible hurt set in and the tears started again.  Now I tell you this not because I need  people to choose a side or whatnot, but merely as examples of how my emotions are CRAZY at the moment!  Like Loco?  WTheck?

It didn't get any better from there.  I physically retreated.  (I know, I know.)

We both went to bed early last night.  Not much was said. We weren't angry with each other, just drained I think.

I had sent a crazy email off to a dear friend, and fell asleep before its  response. Not that it took long, I was mentally fatigued.  I was unsettled and I didn't know what to do with myself. Around 3 am I woke up.  Still unsettled.  I read her email and then a comment written that Blue Bird wrote on my blog post yesterday.

In the wee hours of the morning the two 'comments' although different, had made a connection for me.  I no longer felt guilty, ( well not overly) about New Years Eve.  I had already apologized to my friends.  They were just sorry I couldn't be there with them.  As for my son, he said he was back and forth, and it didn't really matter to him ( mentally he's way more advanced than the kids his age- I know spoken like a true mother, but it is true, he gets tired of some of their 'antics') and he did stay there once his Dad came home.  But the issue of feeling unresolved was that I was more concerned, I think, with putting Barney in that position.  How hard it was for him, especially because he had long forgiven me.  Perhaps he was tentative, or perhaps I just saw that.  Blue Bird's comments, as well as the email, made me realize that as the TiH here, I am to be just that- Taken In Hand.

I know that this is a learning curve for both Barney and I , and we are at the bottom  So this all takes time.  I think anyway, that I needed to see my HoH yesterday, not worry about him.  I'm not sure how that is going to happen, but we'll figure it out somehow.

Now back to my emotions....HOOOOOOOOOOO Nellie!  First off let me apologize for thoughts I may have had over the past year reading other's blogs.  The thought that " you were JUST spanked! How on earth could you get into trouble AGAIN the same day?"  I soooooooo get it now.  Those emotions are all brought right to the surface.  All vying for an outlet.  Happiness, anger, weepiness ( <- I suppose that is a state of mind not an emotion).  And for your HoH...that must send him into a state of extreme frustration a well as being overly cautious. The feeling like things could go very bad, very fast- like holding a package of fireworks in one hand and a lit candle in the other on a breezy day! 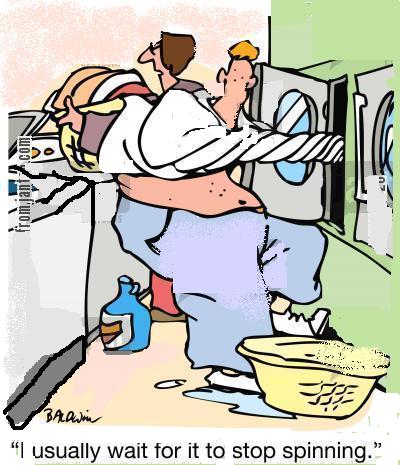 To further complicate things we tried to discuss where we were going in this new year.  Before Barney left for work on New Years Eve, we had talked about our future in ttwd do.  About how things were going to be different.  The need to ' pick it up a bit' if we really wanted to experience the growth in our relationship that we both desire.  I teased, that , " Your wife is out of control"....

Things in the figurative sense were good.  Last night when we tried to discuss actual things, even though I kept saying that it was up to him....I really wasn't relinquishing control of the discussion.  This added to both of our frustrations.  Yes a more experienced HoH, would most likely have 'shut me down'- I realized that after, but my thoughts were NOT coherent at the time.  I liken it to this 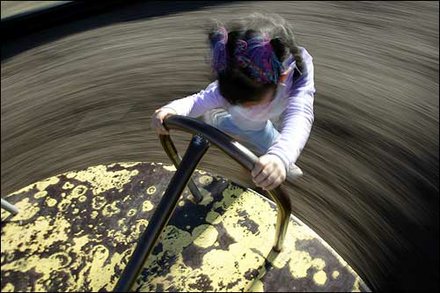 My emotions were swirling- like being on a merry go round at the park ( btw...that always made me sick as a kid- turns out emotionally it does the same thing as an adult).  By trying to take control of the situation, it made me stop the spinning for a bit.  However the sudden stop of the merry go around of emotions, did the same thing as the sudden stop of  an actual merry go round.  It made me feel awful.  I suppose I just needed to let the emotions stop swirling on their own so that I could settle.

Am I blaming the spanking on this?  HECK yes!  LOL...but I don't regret it. I just had no idea that so much would be wrapped up in this action.  You hear of the 'clean slate' and think of how nice that will be.  I had never received the 'disappointed in you' speech in my entire life.  That was definitely a hard one to take.  Don't get me wrong, that doesn't mean I think I haven't disappointed people in my past- I'm certain I have.  I have just never experienced so many emotions all at once-  well I suppose outside of grieving.   It is certainly a lot to process.  Even with a clean slate

I know we have to communicate these things to each other.  We will. We have been.  Sometimes it just takes a while to stop spinning so the logic can come out not just the emotions.  We are so new to this- and although we are in this together, sometimes I feel ( probably incorrectly) that I have to figure out things on my own first.

Perhaps next time ( I mean really what are the odds of me getting spanked again in 2013 ?   Steve- we will not be accepting your calls).....anyway, perhaps next time we will BOTH be able to handle this if necessary 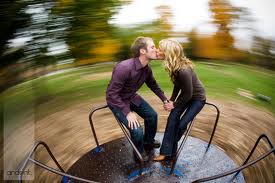 Thank you all for your amazing support yesterday.  I am truly blessed and touched to know so many people that would take the time to comment, offer insight and help... and yes, even Ana and Bas...sheeeeesh!  wink