I know Valentine's Day is coming up and soon we will be inundated with mushy love stories, which is wonderful don't get me wrong.  It is just that aside from my kids, I'm not really a Valentine's Day kinda gal.  When I was in university I worked in the restaurant business.  Valentine's Day takes on an entirely different meaning when you work in a restaurant.  It is the second busiest day of the year ( Mother's Day being the busiest if you are interested, and no Father's Day doesn't greatly affect the restaurant biz).  So being the busiest day of the year, you would figure there would be lots of money made- not so.  The restaurant fills with star-crossed lovers ( only 2 per table) who NEVER leave!  Anyway, my true distaste of the 'holiday' basically lies not in the meaning behind it, but because of the colour scheme... WHO in their right mind ever thought that PINK and RED look good together?  Blech!

I don't normally subscribe to this line of thinking, but there seems to be a little bit of a cloud hovering over Blog Land lately.  So that combined with my dislike of tacky colour day,  ( which had me thinking of flowers and CANDY<- well Valentines Day and PMS had me thinking about the latter) I thought it was time for another interactive fun post.  This post will be along the lines of my Super Heros/ Super Villians ( <- Click to read) Post back in December.

Your Challenge should you accept it, and why wouldn't you?, is to leave in the comments the type of candy you and ( if applicable) your spouse would be.  A brief description and why you chose those candies would be helpful, as we are an international group here.  If you REALLY like me you can email me a picture of your candies, because that does take me a while to find...but it is not necessary.  So without further ado, I will show you some of the ones that are already on the shelves of the..... 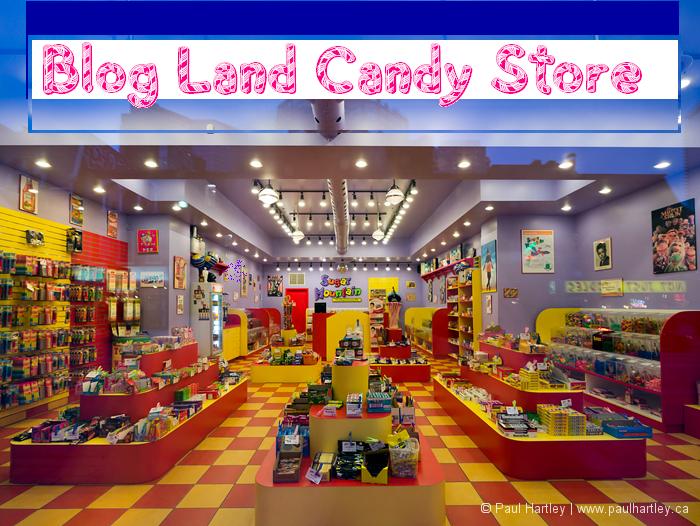 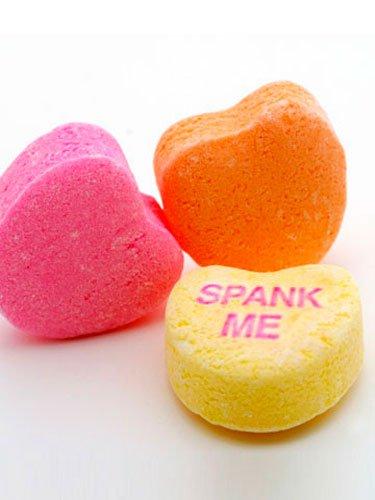 BUT I'm still going with my original Cadbury Creme Egg, that I described in my Panic at the Disco post. 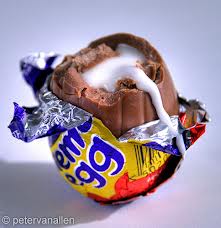 For those who weren't tortured by reading that post, I think of myself with 2 protective outer shells, the foil packaging, that I continually try to patch back together, and the chocolate.  The chocolate can be melted in your hand, but taking a bite out of my shell is the quickest way to get to my inner, sweet, gooey heart. 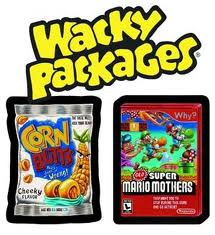 These were big in Canada in the 1980s.  Wacky Packages were similar to baseball cards.  Instead of having someone 'useful' trivia, they took popular products and mocked them.  They also came with one piece of often stale gum.  NO I don't think Barney as hard and stale, but he is the king of BAD puns and comments that make my family groan.  Just like the Wacky Packages cards.

Onto Susie and her Mischief Manager.
( Susie Approved)

For Susie I had initially thought A Hershey Chocolate Bar ( with NUTS) .  Well because she when she is alone, she is solid but after MM takes her in hand, and she is the way she wants to be, she's all melty. We both agreed about that, BUT when I was looking for pictures of the perfect half melted chocolate bar today I came across some even BETTER pictures....so I changed it a tad, for now, until I do the completed post with all of your imput, I am just going to post this pic. 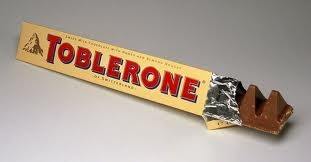 As for her lovely Hoh...well the obvious choice would be this 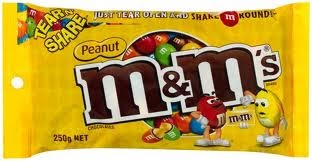 While Susie did laugh at this, she decided on
( Apparently only found in Canada) 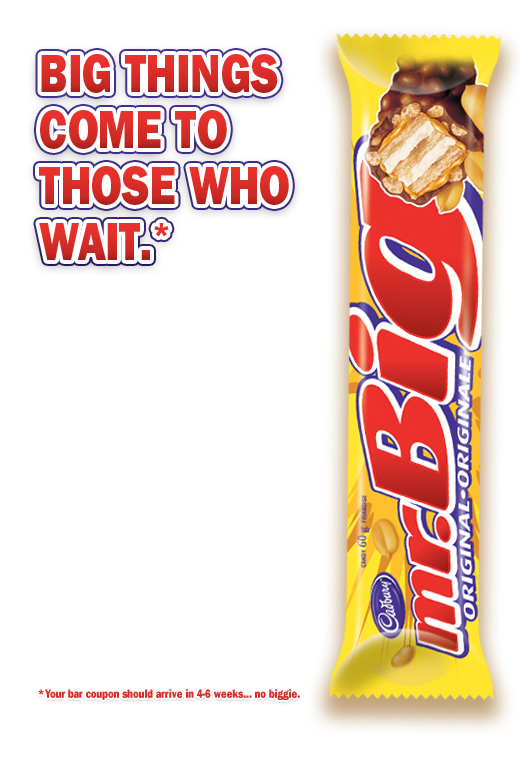 Moving on to Pocahontas and John.  P couldn't figure out which candy they should be...whoo hoo free rein for Willie!! 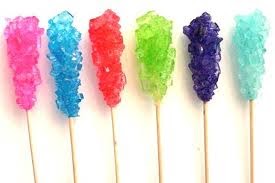 You see my dear friend Pocahontas thinks she's hard, and prickly ( okay that is not the word she uses, but I don't have a potty mouth * wink *).  In truth she is really, really sweet!  Okay, and sometimes she scratches...just like the rock candy...( what ?  I read that somewhere )  In a candy store I am always drawn to the rock candy suckers.  They are so beautiful, even if they appear a tad scary.  They are certainly worth it!

and for her HoH John 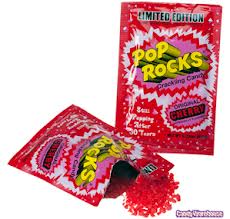 Pop Rocks.  Yup.  At first glance, the candy may be a little intimidating.  Yet they are really sweet, exciting, and have a bit of an edge.  And c'mon who doesn't like a candy that explodes in your mouth ?

Now on to Lillie and Ian-  no she didn't come out to play for this, but remember the Superhero Post?  Rocky and Bullwinkle?  Seriously?  So once again..I'm picking! 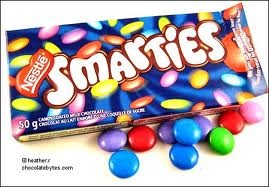 I realize that these are Canadian- just like Lillie, so I will explain.  They are sort of like M & Ms but WAY better. They have a hard candy shell, but not as thick as M&Ms.  And unlike M&Ms that 'melt in your mouth not in your hands',  Lillie melts in Ian's hands...er , or, because of Ian's hands ?

I chose Smarties for Lillie because not only is she a smartie pants, but she has many flavours in her. All of which we love ! ( well in a real box of Smarties I don't like the red ones- lets refer to them as the Work Lillie at Home Smarties)

AND now onto Mr. Mammoth Hands McSpanky Pants.  Google didn't come up with any confections with a tag line anything close!  Fortunately I already had something in mind

( again not sure if these are found outside of Canada) 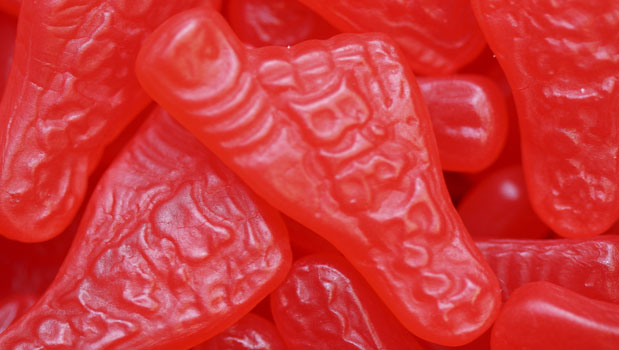 Anyway Lillie went on  and on once in great length..about his FEET! ( honestly )

Not why I chose Big Foot for Ian though.

Big Food are cinnamon flavour ( btw I'm allergic, but also not why I chose them   * wink *)

Like Ian, at first glace, for those not 'in the know' they seem hard- but they aren't they are chewy and soft.  They are soft and BRING THE HEAT !

So what say you?  Want to line the shelves of the BlogLand Candy Store?  I will most likely compile all your data and work on the final product on the weekend.  C'mon it is silly, a complete waste of time and FUN !  Besides, I WILL pick for you if you don't offer me something.....wink

Oh yeah, and Emi no choosing what I did, like you tried  to with the Superhero Post!

Oh PS. again...George, Robin and any other 'anonymouses' out there you are expected to play too!

Oh and don't worry people, you are not too late.  I won't be putting up the final one until Monday- and even after that it is not too difficult to add to!