I was one of many fortunate to have a pre release reading of Renee Rose's latest book,  The Reddington Scandal, ( Canadian Link, but you can switch it to whichever country you are ordering from).    I have to confess that I have only read one of Renee's stories before, Lady Mariwyn's Punishment., ( hangs head in shame).  I did however love it, so I jumped at the opportunity to read her latest story! 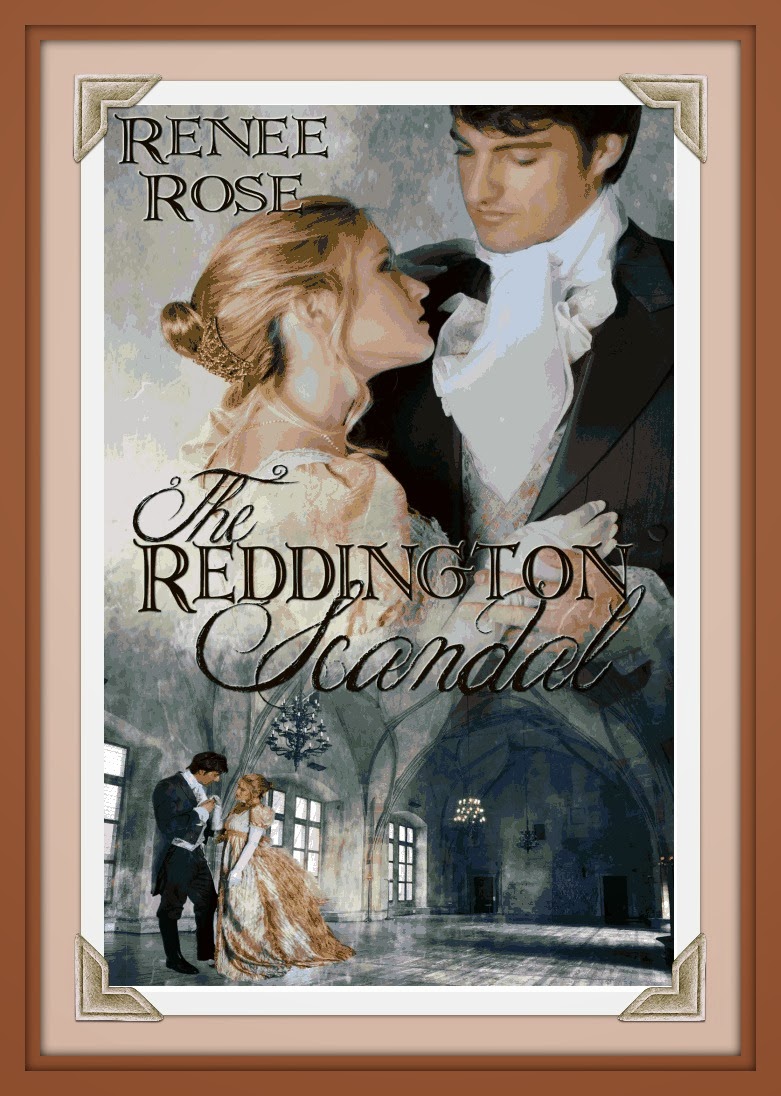 I mention my lack of knowledge of Renee's other stories because perhaps you are like me.  This story is a 'spin' off if you will from another book of Renee's,  The Westerfield Affair.  Do not let this detour if you haven't read this book ( although you could buy both!) I had not read that story first, and was NOT lost in the least.  One of the things I loved about The Reddington Scandal  is the fact that while Renee may mention characters from the previous story, snippets from the other book did not consume this story.

This story is about Teddy Fenton a rake,( stud muffin by todays standard) in the Regency era.  He is caught in a compromising position and the virginal Phoebe steps in to save him from her angry brother in law.  Teddy must marry Phoebe to save her good name.  So why would it be believable that a rake would do such a thing?  Care about the good name of a woman who has no emotional ties to?  Because of the way Renee writes!  She manages to weave Teddy's past and relationships with his younger sister and mother into this spanking fiction in a way that has you believing that at his core, Teddy is a kind man, who is capable of loving one woman.

What I love about this spanking fiction is the fact that it is a story first.  Yes there is plenty of spanking and well, sex, but it flows within the story.  It fits.  It belongs.  I live a mild Dd marriage.  Dd lite, I believe it is called.  The situations in which Pheobe finds herself in trouble with Teddy,  are very believable.  So believable that over a hundred years later, my husband would probably react the same way.  I love how  Teddy is not a tyrannical, benevolent dictator.  He wishes nothing but the best for his wife.  He truly wants her to 'grow' within herself.  He has plenty of patience and humour. In short Teddy will make you swoon!

Phoebe is also  a believable character.  She isn't one who out and out brats.  The situations that Renee places her in, that leads to spankings, are ones many could find themselves to be in.  Often they are brought on by emotions, and lack of communication or understanding.  She is a very likeable character, who is given more depth because she is hiding an emotional trauma from her husband.  This brings on an underlying tension throughout the book.  Her fears are just as much of a villain in this story as the one who caused them.

All in all what I am trying to say here is, I loved this book because it has depth of character and a believability to it.  Even though it is set in the Regency Era, the spanking story lines could transcend into the present day.  I started reading it, for only a moment, one afternoon and didn't put it down until I finished it.  I became invested in the characters.  I was rooting for Phoebe to let Teddy be everything she needed.  At no point in this story do you 'skim' to get to 'the good stuff'.  It is very well written.  And although I didn't have to pay for this book,  I can assure you that you will feel you have received your money's worth.  You will not feel like you were rushed to the end.  You will be satisfied- although if you are like me, you are hoping Renee is now writing about Teddy's younger sister Wynn  so you can read all about Teddy again!

I have never reviewed a book before, as I am certain you can tell.  TL over at Learning to Let Go, has done a far better job so please go read her review if mine seems too disjointed for you!

Thank you Renee for trusting me with your latest 'baby'.
at 11:39 AM