We Wear A Poppy 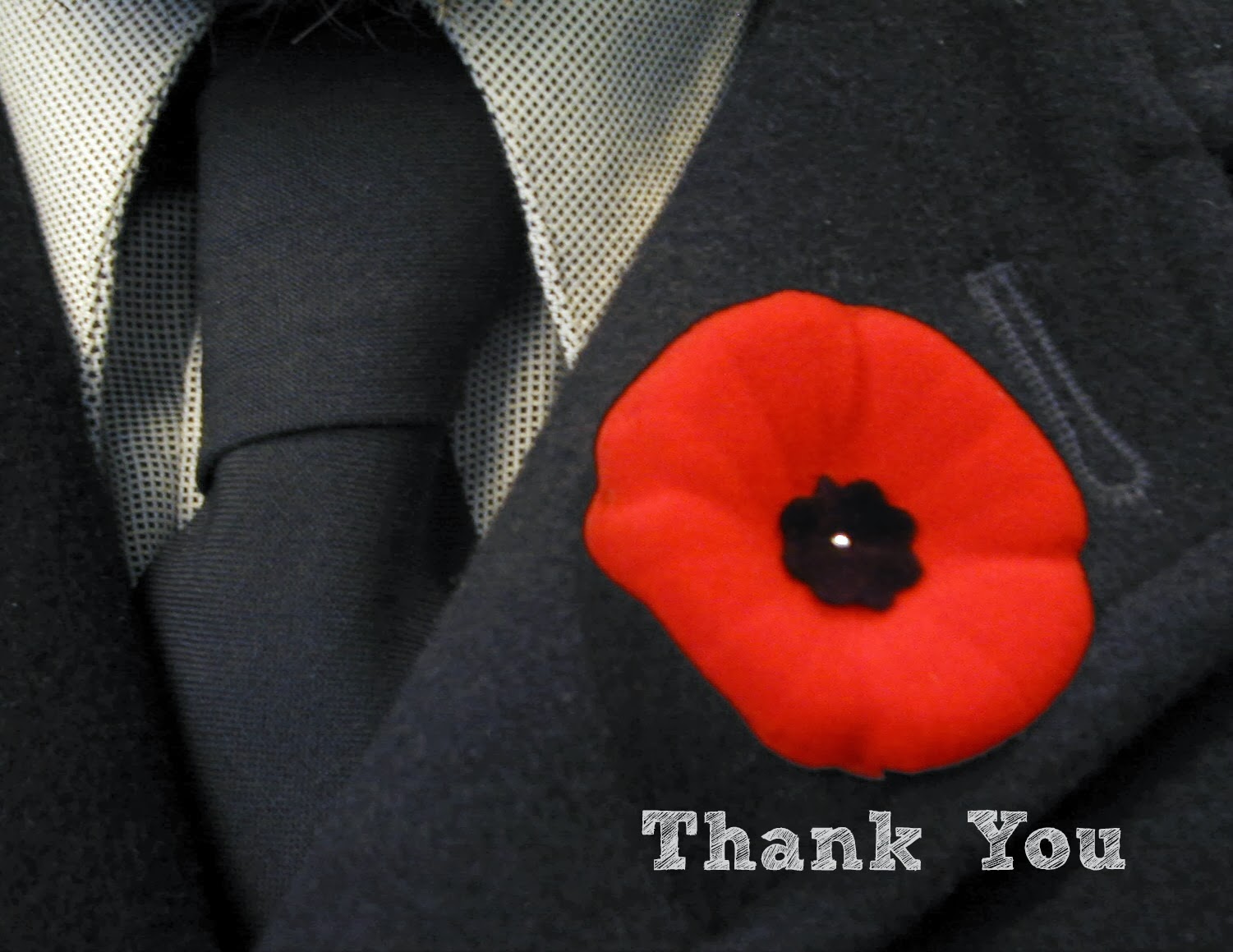 November 11 th is a day of Remembrance. We wear a poppy to remember those who have served, here is why:

The poem for those who have not read it.  Here in Canada it is on the lips of every  school aged child on Remembrance Day


In Flanders' Fields
In Flanders' fields the poppies blow
Between the crosses, row on row
That mark our place; and in the sky
The Larks, still bravely singing,fly
Scarce heard amid the guns below
We are the dead.  Short days ago
We lived, felt dawn, saw sunset glow
Loved and were loved, and now we lie
In Flanders' Fields
Take up our quarrel with the foe:
To you from failing hand we throw
The torch,  be yours to hold it high.
If ye break faith with us who die
We shall not sleep though poppies grow
In Flanders' fields
Major John McCrae 1915
﻿
A Repost from Last Year.....﻿
﻿
I am quite nervous about writing this particular post.  Why? -because  I am writing this post  to express my deepest gratitude and reverence to not only Veterans but People in the Armed Services.   I really want to convey my gratitude in a thoughtful way, and I am certainly no author.  I merely recount things in my daily life.  As this topic is of the utmost importance to me, I will give it my best shot.

I would like to tell you a little about Barney’s father first.  Barney’s father was 27 years old when he began flying for the RAF during WWII.  He flew .  He never saw combat as he became a flight instructor in during the war- he did watch as many of his friends and 'students' leave on missions only to never return.  His only mission  was after the war dropping supplies over The Netherlands. For this he was grateful.

Mr. Rubble had numerous photos of his time during the war and even kept his flight manifest.  There was one photo he had that was professionally taken  of him in his uniform and an unidentified woman in a uniform.  No one knew who she was, and no one ever asked him.  He apparently was quite the ‘player’ back in the day, so everyone assumed she just was another girlfriend.

In his later years Mr. Rubble was diagnosed with Alzheimer’s.  He was quite on in life when this happened so it didn’t take ‘hold’ very quickly.  That being said, he seemed to relive stories from his past more vividly then he did before.  One story that he seemed to relive as he told was of the mysterious woman in the photo.  No one asked, but one day he just started speaking through tears.  It turns out the woman’s name was Rosie.  He met her during the war.  They fell in love and became engaged.  The photo was taken so it could be sent back to to show his family his fiancé. It was never sent.  She worked in an ammunition's factory in .  It was bombed on her shift.  She was killed.

Mr. Rubble’s mother had 5 sons.  All of them left to go and fight throughout various locations in .  As a mother of 3 boys I can not imagine what those years must have been like for her.  She was so very fortunate, where a great deal of other mothers were not- every single one of her sons came home to her.

I grew up in an Air Force town.   I went to school with children who’s parents were in The Forces.  I babysat for people who were in The Forces. My uncle and my cousin both served in the Canadian Air Force.  I have to drive through a Canadian Armed Forces base to get ‘home’, and I see the yellow ribbons attached to every sign post on the highway when another one of our soldiers is killed.  I have driven on the of Heroes in , and although I have never actually been there when they bring a fallen soldier home and down the highway, I cried driving on it anyway.  I have been to the Airborne Cemetery in Oosterbeek in the Netherlands and stood by the graves of fallen soldiers who never made it home, even in death. 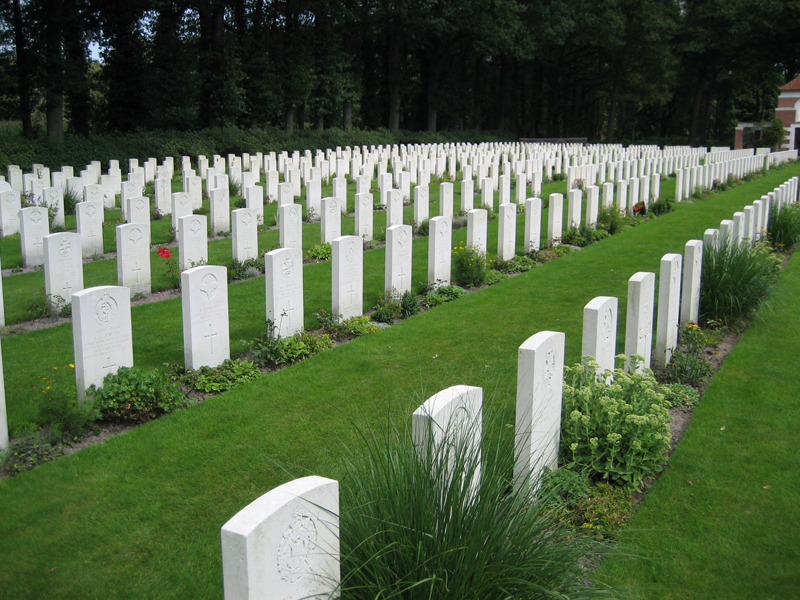 What I haven’t done is explain to my children why Daddy is missing their birthday.  Why he seemed different since he came home- or why he isn’t coming home.  I haven’t waited to hear if my husband is leaving us.  I haven’t had sleepless nights wondering if my husband is safe, warm, lonely, hurt.  For all you wives out there who have, I thank you for your sacrifice- whether your husband wears a Canadian Flag on his uniform, or an American Flag, or any one of our Allies’ flags- I thank you for your sacrifice. 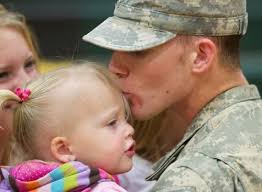 For the men/women who do what you do to keep our world safe, I thank you.  I thank the Canadian Soldier past and present.  My gratitude is equally extended to the American Soldier.  I express my thanks to all of our allies that leave their families so that my family will remain safe.

My children are huge history buffs.  We discuss war and conflict, past and present.  They have been to the Canadian War museum and know a great deal about the artifacts within its walls.  Yes they play their Playstation Call of Duty game, but we make sure to discuss real life and the game.-having conversations, which they initiate, about how they couldn’t possibly imagine doing this in real life.  They have a great respect for those who Serve.  That is what we do as parents.  We teach our boys that they have their freedom because of people who Serve and sacrifice for us.  We ‘can’t imagine doing it in real life’, but thank God there are men and women out there that do. 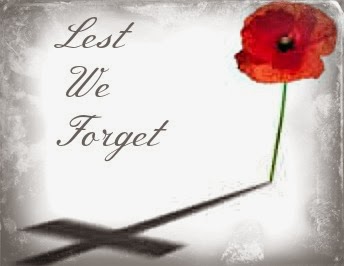 On August 24, 2007, the MTO announced that the stretch of Highway 401 between Glen Miller Road in Trenton and the intersection of the Don Valley Parkway and Highway 404 in Toronto would bear the additional name Highway of Heroes, in honour of Canadian soldiers who have died,[116] though Highway 401 in its entirety remains designated as the Macdonald–Cartier Freeway.[117] This length of the highway is often travelled by a convoy of vehicles carrying a dead soldier's body, with his or her family, from CFB Trenton ( Canadian Forces Base Trenton)  to the coroner's office at the Centre for Forensic Sciences in Toronto. Since 2002, when the first dead Canadian soldiers were returned from Afghanistan, crowds have lined the overpasses to pay their respects as convoys pass.[118]