The Balance of Power

I already know where the balance is supposed to lie, by choice, in our home.  To be truthful, it does lay there more often than not, despite what I have written.

When I titled this The Balance of Power, I was referring to within my mind, not the concrete stuff.  Is there a difference?  Maybe.  Does it mean that the balance of power isn't ACTUALLY where it should be if in my mind I have it?  Perhaps.  Ah so many questions....

As I have mentioned, sadly far too often, life LOVES to throw crap at us.  I know we can all say that, but I mean HONESTLY, enough already!!!   Despite my recent claims and discoveries about submission and vulnerability, I still do manage to get myself 'locked up' in my head at times. 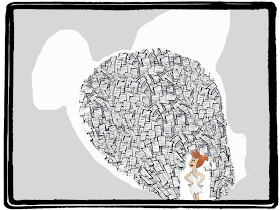 I obviously share a great deal of my worries with Barney.  Many of them are his as well.  Okay most of them are.  The difference being how we think about each situation.  Not as in how we think we are going to fix it, as in how we actually THINK.  Man vs Woman?  Venus vs Mars?  Wilma vs Barney?   Just different.  He and I are both very analytical, albeit I look at things vastly different than he does.  While things will affect him emotionally, I will not only be emotionally visual, I will lay out road maps for every emotional possibility, with every probably outcome.  This is an issue of sorts because I do this with EVERYTHING, not just 'our child is in crisis' but 'what if our van breaks down'.  Obviously to Barney the latter doesn't require an emotional consideration.

What does this have to do with the balance of power?  The longer I stay in my head, the further I drift away ( I know nothing new here for most of you).  I was discussing this with a friend last night, I think of my submissive core as a bulls eye. 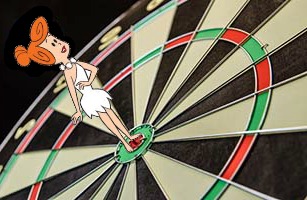 Ideally we want me to be as close as possible to the centre.  Life, thoughts, etc.. have a tendency to allow me to drift from that place.  Still on the board, but not the best place. Of course the desire to be in the bulls eye also adds its own pressure and issues too!  lol

Anyway........while things around here may be ticking along externally as they 'should', internally perhaps they are not.  Non ttwd related things can eat away internally causing a shift.  A shift not only from the 'bulls eye' but in the balance of power.  It isn't that Barney isn't holding up his Dommly side of the bargain, it is perhaps that I am not holding up my side, mentally.  It isn't intentional.   There is no out and out bratting or reckless abandonment of expectations.  It is just bit by bit, thought by thought the power shift changes.  A distracted expectation 'performed' here.  A forgotten desire there.   Bit by bit.


Before I know it, and especially before Barney does many times, the balance has shifted. 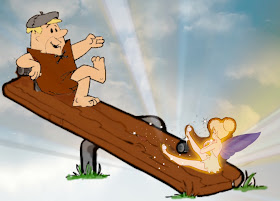 *I* have created the shift. ( Of course my loving husband will take part blame saying he should have paid closer attention and I wouldn't have drifted too far from my core).   Once the shift has occurred times become more difficult here.  A distracted expectation becomes a forgotten one.  A forgotten desire becomes an after thought.   Confusion sets in for both of us at this point.  What has changed for her, on Barney's part...and well on my part far too many things to list.

Perhaps the most significant one we have had to deal with though has been my perception of things. It has occurred to me that once I actually feel the balance has shifted, I start to look for ways in which to restore it IN him.  Not build him up to be back, but find things he says or does and give them more meaning and weight than perhaps he means.  What he thinks is a lighthearted comment, is taken seriously, whether as an insult or a threat depends on the day and my mindset.  Primarily in these situations however I am searching for a different dominance to bring ME back.

Last week Barney was explaining where his mind was during one of the times I felt hurt while searching for said dominance.  During that conversation he expressed how difficult it was to understand my emotions.  I informed him understanding my emotions wasn't necessary, nor was it even possible.  I could list all the reasons WHY it isn't possible, and trust me I did for him, but who has the time today ? ;).   I did say that understanding the 'issue' that caused the emotions should be the focus.  Validating my emotions or rather my right to feel that way would go a long way, but I wasn't aiming for the stars! lol.  What doesn't help is judging my emotions.  By doing so it dismisses my feelings and in turn, ME.  Furthermore it pushes me away from my core due to me becoming defensive ( feeling my emotions  are inconvenient at times at best for me still) concerning them AND has me shutting down verbally.

It is a difficult thing for a man or at least MY man to grasp that emotions cannot be fixed, or categorized by rationality and there isn't a universal acceptance to "B" happens therefore the correct emotion should be "G".    I did suggest that he could feel free and justified in judging my reactions and how I dealt with my emotions, just not the emotions themselves.  My reactions can and often are irrational, but don't you DARE claim my emotions are...LOL.  I went on further to say, but by all means nothing says you can't communicate a thought such as, " I can't comprehend why you are emotionally reacting this way, as I am not wired to have that sort of emotional response".  Pfft like THAT is ever going to happen! *wink*

To be fair, looking back I can see that the balance had started to shift before this conversation.  Occasionally through much work and reflection, I can bring myself back closer to the bulls eye, but I can't shift the balance of power on my own, even if I am the one who ultimately created it.  Often life's curve balls will shift the balance back in the blink of an eye.  Ideally though that isn't the best case scenario as we have external issues to deal with long after the balance is restored and the shift can happen again, and swiftly.

Barney eventually recognized that I *felt* the balance of power had shifted.  Recently it manifested itself as me feeling the weight of the world on my shoulders, among other things.  I considered some decisions I had made to be acting alone, and feared the repercussions of those decisions, (not with him).He did not see it that way at all.  He reminded me that he was in the room and agreed prior with one. As for the other  while I made the call, I had already discussed  with him when we thought the time would be right and what that meant should the call need to be made.  SEE?  perception.  Mine was clearly off.  By discussing this, and let me tell you multiple spankings,(many interrupted or cut short) in between,( did I say MULTIPLE ??) all came to a head.

Did we fully understand what was happening during the time?  NOT a DAMN CLUE.  Lol.  While both of us probably knew what needed to ultimately happen, the whys were unclear.  I mean aside from the fact that I apparently 'inspire' him to 'beat' me.. Pfft.  ( NOW who's perception is off?).  Did communication clear this up?  Eventually, but as I said we didn't have a clue what we really needed to talk about. It was like two emotionally-charged, blindfolded people, roaming naked in a cactus field, ( you're welcome for that visual).

It all worked out.  The Balance of Power is currently restored. I'd be lying if I didn't confess I feel like it is rather precariously perched at the moment however.