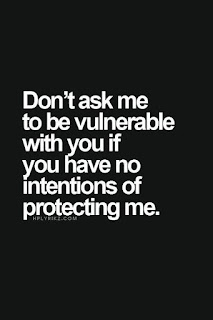 I realize I am about to potentially open up a can of worms here, but here goes nothing.  I was trying to find a way to express to my husband what it is like to feel, what up until today, I would call vulnerable. You know the way you feel when everything is 'right' in your D/s relationship and you feel you can just 'be'.  I thought I would look up the word for inspiration~ not because I don't know how it feels, but because I was looking for a less floral  willie way to say it.

Those who know me, know there are a few terms I don't relate to around 'here'.  Journey for example is one of them.  As I have said countless times journey conjures up a vision of a cat and two dogs travelling across the country trying to find their owners who 'forgot' them when they moved. 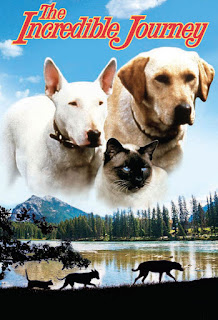 For me ttwd is much more like an adventure. Some great friends, some scary times, and creatures that appear scary initially, but aren't in the long run. 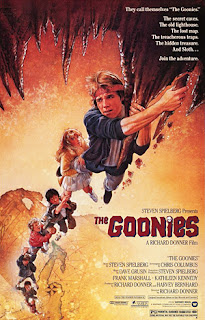 So I use adventure not journey.  ( Also not a fan of referring to my husband as my HoH or Dom, again that is just me)

It would appear now that vulnerable may make the list of words being booted out of my wheel house. As I said I looked up the word and the definition not the wide interpretation of the word, it wasn't something I could actually BRING to my husband.


I am unsure how other men would interpret this, but I can tell you that at the beginning of ttwd my husband would NOT want to take me on an adventure if the description above was the destination for his wife.  I KNOW, I can hear you yelling at me now, " Yeah, but...."  Look, I am just sharing the actual definition.  Try and 'think like a man' ladies.  LOL.  How many times have you read or heard women ttwd relationships say " My husband is concerned I will become....(insert a version of this definition).

I know among ourselves here, as women and perhaps even husbands who have been able to concretely see/feel what we mean, understand a different ttwd-version of vulnerability.  ( I do agree, as I will talk about later that we have to be vulnerable to GET where we are going however). 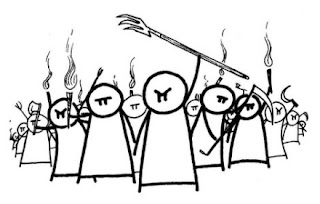 DON"T yell at me.  I am not saying we are WRONG, I am actually trying to say, maybe a collective 'we' have been sending some conflicting messages by using the word vulnerable with the opposite sex.   When I approached Barney with my findings he admitted that when I first talked about vulnerability he couldn't understand why that would be a good thing.  He thought of it in a military way, like fortress that was susceptible to harm.  Over time through reading blogs and on forums, he understood what the collective 'we' meant, but it isn't his definition of vulnerability, again as the end result.

While clicking around on the internet, I came across invulnerability. Here is a definition given for this word
Incapable of being wounded, or of receiving injury; not vulnerable.
Unanswerable; irrefutable; unable to be damaged by an attack or convinced

I will tell you when I am what I have previously stated in my most 'vulnerable state', I actually feel VERY content in my own skin, I am almost euphoric, and I feel very, very STRONG because of it.

I wrote recently about hair trigger emotions, and being vulnerable and the potential for hurt.  After reading and discussing today, I am beginning to think I was wrong about that.  The potential for hurt isn't IN what I used to refer to as my most vulnerable state, it happens as I am leaving it.  The fear of losing it has me reacting the way I do.  While I am what I refer to as "in the zone", " true to my core" , "in the bulls eye" or " squishey, squashy, cuddly with my husband"  I am Teflon Girl.  The little troubles of the world slide off me, rather than stick and burn.  Sure life and all her bipolar bitchiness throws stuff our way that has me moving from my core, but I am open and unguarded with my husband and others.  I am not defensive.  I don't look for 'monsters under the bed' that aren't there.  Bumps in the night are just that.  Even moving slightly away from my core, those things all have similar perspective.  What I am not though is a dictionary definition of vulnerable.  Because that definition has not one word of strength or contentment in it.

I now believe that we do have to spend a great deal of our time in a vulnerable state.  For myself I will say that when I am slightly away from my centre, core etc.. I have to be willing to be vulnerable again.  I have to 'put myself out there' with my husband.  I have discovered recently that even though we have reached this amazing level (for lack of a better term here) in D/s emotionally, there are still many many times where we encounter issues.  There are still times of miscommunication. These times occur when we stop communicating (or at least I do) about issues that I would have considered 'novice' Dder or D/s issues.  And while the steps are still similar,the emotions are deeper, and the situations surrounding are different. The new depths can echo old insecurities, just with a different spin. I think *maybe* because there aren't as many epiphanies as we go along or they aren't always as great, we tend to lose focus on the sharing aspect....again I am speaking for Barney and myself. 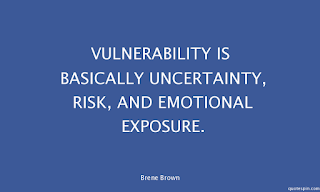 When we are where we want to be, there is no need to be vulnerable.  There is as I said this amazing euphoric state of being.  I am not worried about rejection, or his reaction, about getting hurt.  I feel an acceptance in my own skin. I am no longer vulnerable.  Maintaining that level of being is extremely difficult however, with life always seeming to have me inching away from my core.  Hence forcing me to be vulnerable again and not wall up.

I suppose the real question is, can you be vulnerable if there are no threats?  Take an orchid plant for example.  It is extremely vulnerable in many parts of the world.  However in a controlled environment, ie a greenhouse, is it really vulnerable?  If its needs are met adequately; water, sunlight, temperature, is it really at risk?  I don't think so.  It is at risk when someone opens the door and the outside world can make its way in, but if the caretaker is aware, adjusts the temperature, closes the door fast enough, squishes any pests that enter, the plant becomes no longer vulnerable again.

Maybe I 'lied' a bit.  There are times when I do fit this text book version of vulnerability since starting ttwd even in my euphoric, I am on the bulleye state.  There are times I am a bit afraid, more than I used to be.  Or rather more aware of it than I used to be.  I seek out my husband ( say in a crowded place) for comfort, and that little bit of vulnerability does make my heart flutter as much as it does my stomach turn.  Why?  because he can make it alright.  No one else can.  Sure I could be with any number of people who love me, but only he understands (as best he can) that I am anxious. He is my anchor in times like these.  That being said, those times don't define me.  Those times are outwardly, concrete and tangible signs of vulnerability that he can change.  Is it rewarding to him?  I'd imagine so, (swoon -my night in shining armour) but how rewarding would it be for him on a deeper level, if he felt he 'created' a dictionary version of a vulnerable wife?  Ttwd has forced me to face many of my fears.  Some of which I have been able to almost overcome, or at least quiet them a little. Other fears have been given a voice and therefore are out in the open more.  There is a potential for hurt there, but generally it doesn't surface.  So I am unsure if I could say I am text book vulnerable at that time.

I will say I allow myself to feel more.  I will say that has the potential for great hurt....potential.  It isn't a forgone conclusion though, for if I am standing on the bulls eye I have an ability to see 360 degrees, and that is a fantastic viewpoint to see all stories behind something/someone actions, words, motivation.  One sliver off of the bulls eye however and things do tend to alter the view a tad. And the longer I am off the centre, the more I drift away and the more the perception begins to alter.

One could argue that if your walls are down your unguarded self is open to attack.  I can't argue that.  Everyone is different. When we are where we desire to be, which as I said is not often, vulnerable is not what I feel.  I feel so utterly content.  I feel powerful (inner power) with the armour shed, because it is not needed.  I feel weightless. I feel strong. 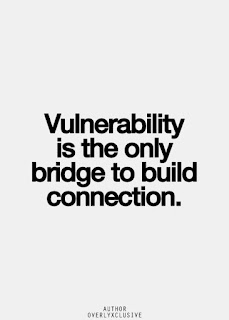 I do have to reenter my vulnerable state over and over again to regain what we desire. I therefore believe, at least in my case, that vulnerability is a necessary 'evil'-  A means to an end but NOT the end goal.

********
Something  I have never done is ask what people think ( I just always assume people will share if they want to..meh guess not) but have been told by a couple of ladies, one bossy *cough* Susie *cough* one to ask " So what do you think? "  ( sheesh that still sounds lame to me...just sayin' )
at 4:32 PM