Analogy and an Update

Not too long ago part of our family went on a little getaway.  One of the days 4 of us decided to go for a little canoe and kayaking trip down the lake. Two family members took out kayaks and Barney and I were in our canoe.  I love being in the canoe, paddling it?  Not so much.  In my mind I had a vision of Cleopatra being paddled around. 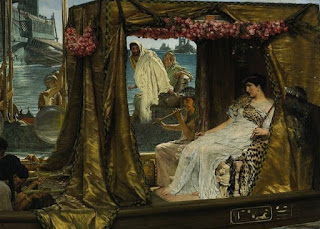 After about an hour of paddling we reached some 'cliffs' where one of the boys wanted to jump from. The shoreline in that part of the lake was very rugged and therefore difficult to tie off the kayaks.  In addition the water was choppy that day, and we didn't want the kayaks banging into the rocks while they explored the cliffs.  Barney and one of our sons pulled up one kayak on the ledge and I transferred into the other to paddle around as we waited.  I will confess with the way the water was that day, I wasn't strong enough to successfully handle the canoe on my own. 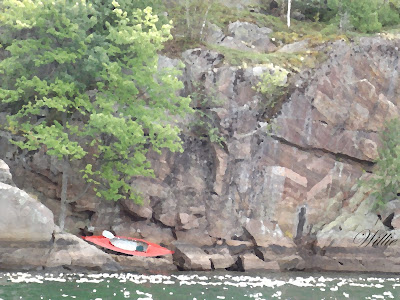 In the past I LOVED paddling the kayak.  It is so much easier than paddling the canoe, particularly this one as it has a rudder.  This day not so much.  I found myself a little adrift and disconnected ( not because I lack the awesome paddling skills it takes to control one..LOL).  I had very little trouble maneuvering myself in the choppy waters, especially after Barney reminded me of the pedals that controlled the rudder, I just didn't like being out there alone. I could choose whatever direction I wanted, explore what I wanted, ( yell directions to my kids climbing the rocks) but  I realized I preferred the company and security of being in the canoe with him.

It occurred to me this was a living analogy of ttwd.  For years I would jump in the single kayak and paddle around choppy waters, viewing what I wanted.  It even appeared easier than canoeing in the same 'boat' as Barney.  I didn't have to concern myself with how we got to the same spot, just if we made it there eventually together.  Now I find a great insecurity in times like that.  I still know I can manage, I just don't want to.

Paddling with Barney in the canoe was NOT like being Cleopatra, nor did I want it to be once I got in.  There was no 'lily dipping' involved.  At times to make it where we needed to go I had to dig very deep, my right arm aching, ( stupid tendinitis) but not only was it invigorating,  I was calm in knowing he was steering behind me.  I will admit there were a few times I was steering from the front (rocky shoreline, and dead heads in shallow water) as it was needed because he couldn't see, but that was a handful of times and I never forgot that he was the one with the strength steering.

I know I haven't written in a month, but of course that really isn't unusual anymore for me.  Things became really quite awful for a while between he and I.  At one point I was examining myself, and my 'growth'.  I feel like I should shout out that I love my husband, but there was a bit there I was trying to decide how much of myself I was going to sacrifice to be with him.  I realize that sounds awful, and I will try to explain with very little details..LOL.

Over the past 4 years, most of which but not all of that time doing ttwd, I have discovered, unearthed, whatever adjective you would like to use, a great deal about myself.  Not only have I discovered things about myself I have become very comfortable in my own skin.  ( Still a lot of work to be done there, but who isn't a work in progress?).  I could go on about past struggles and discoveries, but there are approx. 180 posts that describe in detail how I got to where I am.  To say it was a difficult 4 years many times, would be the understatement of a lifetime.  The last 9 months have offered some incredible challenges which have bullied their way into our relationship.  YET, yet through it all, I continued to discover and understand myself, even more.  I discovered one day that I truly have the ability to be at peace and totally content.  Don't misunderstand, I am generally I pretty optimistic person, but 'zen like" ?  probably not a description I would have chosen.  I think if I had to choose the greatest thing about ttwd right now that would be it. It gave me the gift of me, warts and all. 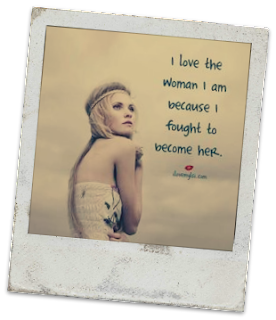 A month ago we weren't in a good place.  Prior to that we were both in the same canoe, but it felt like ( my perception, is not always the reality I understand), not only was I steering from the front of the boat, he had dropped anchor.  At times I was able to move us forward, or perhaps he'd dip his paddle in and we'd inch toward where we needed to go, but for the most part not only were we stagnant, the water rushing over the side was threatening to sink us.  I eventually decided in order to save us as individuals we would have to jump over board.  Barney lifted the anchor and we drifted for a day or two.  He then began to paddle like I had never seen before, ( um literally and figuratively..LOL).

I want to point out here, that while this appears to have to do with ttwd, it was the magnifier not the issue at this point.  Have things been better since then?  Absolutely.  Has it been smooths sailing, OH HELL NO!  There have been countless missteps along the way, from both of us.

I will be perfectly honest, I didn't WANT to submit to him on numerous occasions. This is something very new to me. For the most part he took all of that in stride, telling me he knew he had to be stronger.  There were times he beat the living daylights out of me.  Times he walked away, and times he grabbed onto his planking wife, who would not let go and embrace his hug, chuckling and commenting on how feisty and stubborn I can be while he did. 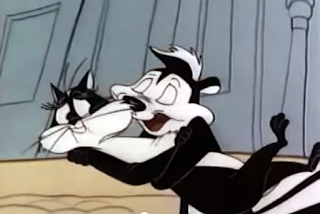 Did he react in every situation in a way beneficial to us both?  Nope.  But neither did I.  He did however keep going, and by that I mean eventually..LOL .  We both have a lot of history to overcome. 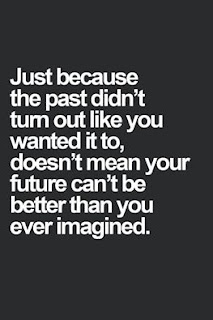 The dreaded C word has been around more and more.  I have been communicating in a somewhat effective way.  I went back to our 'roots' and started writing him emails every few days and explained how or why things did or didn't work for me that day.  I joked that it was his report card, explaining the information was INTEL not a Critique.  Telling him what worked and why has been extremely humbling for me.

For his part Barney initially seemed like a changed man.  When I informed him of this he said he felt different too and he couldn't explain why.  Do I still see that man?  Currently I don' t feel him like I did, but when I brought this up, he said he still feels it~  suppose my perception is off at the moment.
I will admit life has us tossing on the waves again.  Meh.


We are still hitting speed bumps, and neither one of us are surprised by that.  We still have a lot of history both ancient and 'new world' that needs to be overcome.  For the most part though, the feeling of the approach has been different.  I don't feel like a caged animal within myself.  I would be lying if I said I can turn to him as naturally as I have been able to in the past, but I am working on it and hopefully it will become second nature more often than not soon enough.

I just want to end with something that shocked me.  The first time back out of the gate with the physical aspect of ttwd, something happened to me.  I didn't 'melt' or 'swoon' right after.  I had my often typical reaction of thawing about 30 minutes to an hour later.  Barney had continued his, ahem, dominance for a long while after, which I think looking back really helped.  What did happen that day, and for a couple of days after,  the armour crumbled.  It crumbled like it hadn't in MONTHS.  To be honest it shocked me.  HOWEVER,  the hair trigger emotions of last autumn returned not long after the armour crumbled.  This time we were able to talk through it~ but MAN was that messy! Really, really messy, albeit for a shorter time span and Barney was somewhat able to understand it more, as was I.  I eventually confessed that I do have the ability to feel hurt easily, but that doesn't mean he actually is the one hurting me.  A great deal of it can often be attributed to how I see a situation, not really his actions-when I am raw and lacking armour.  I wanted to mention this because I was shocked that I became so unguarded so quickly.  I was shocked that for whatever reason that day, the stars aligned or whatnot,  9 months of being locked up just disappeared.

It didn't last long...LOL...but still! If it can happen so quickly after so much time had passed, it can certainly happen again, though I am not expecting it too necessarily.

There are definitely times where I am steering the front of the canoe, but things are different.  I am steering the canoe away from eminent dangers,ones that Barney may not be able to see from his vantage point.  I suppose really I am just pointing to the dangers and he is taking that information and charting a different course, more than I am actually steering. 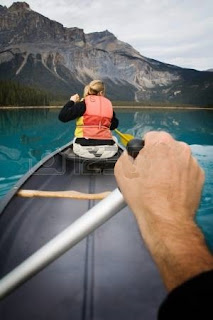