This post is twofold really, his anger and mine.  Disclaimer here, this is by NO MEANS a one size fits all post. This is about Barney and I.  If your take away is that this is you as well, great you are not alone.  If you find that it is all wrong with your belief system, that is fine also.  As always my blog is based on our personal experiences, thoughts and feelings.  I am not here to 'convert' anyone to my/our line of thinking.  I am merely sharing...

When we first started ttwd in a more traditional Dd sense, if anyone needs a label for the start of our 'adventure', Barney read a lot of blogs.  He absorbed a lot of information.  It is difficult at the beginning to decipher what is 'for' you and what isn't.  I will say at the time he wasn't big on the 'how to' blog of the moment.  He attempted a few suggestions there and ended up completely frustrated as it seemed to appear too cookie cutter for him/us...and anyone who knows me, knows I hardly fall into a specific cookie cutter type mold (as I am sure many of you reading probably feel the same way).  The one thing he did take away and it still rears its 'ugly' head every once in a while is, " Whatever you do, do not spank when you are angry".

WHAT?  you say that is an 'ugly' head???  For us, YES!!!!  I didn't marry a man who needed anger management. I married a kind, somewhat sympathetic (lol) soul.  I have always felt loved by my husband, and respected (though some days I will admit binoculars or maybe fog lights are required to see that...snort).

Now for me, anger is faaaaaaaaaaaaaaaaaaaar different than RAGE.  Rage is a hopefully fleeting moment, that I haven't seen on my husband's face, but he informs me  when it is in him. ( I know right?  What could I possibly do, sweet, sweet Willie, that would bring out RAGE from this gentle soul ?  ) During these times he steps away or forces me too.  Sometimes I listen, other times...well


The other night, and truthfully I don't even remember how it started, I found myself over the end of the bed (not his go to place or position, but it was an 'inspired' moment let's just say), becoming intimate with his cane~ sadly not a euphemism for anything.  Because I am stupid, and that night apparently uncharacteristically stubborn (oh hush!) I kept flapping my gums,through clenched teeth that is.  Let's just say I didn't agree with the way he saw things. Like that really matters.  After a few minutes of back and forth, both of the cane and verbally, he stopped and sat down. He said he was too angry to continue.

Flash forward about 15 minutes later, and a lot of back and forth, perhaps a bent lexan cane (stupid things won't break!!!)and I was over the bed again.  This time I am not entirely sure how it happened. Oh don't get me wrong I know WHY it happened, just not how.  Somehow my husband morphed into The Flash.  I was over the bed,  pj bottoms ripped, getting the snot beat out of me with a bent cane, which would have been humorous, if it wasn't so painful. I arched my back up, only to have an elbow (I think) pushing me back into place.  My palm was caned deliberately, for not moving it. The sole of my foot whacked, again for not keeping it down. The cane, none too gently flung across the room and replaced with something new.  Again all so quickly. How did he get across the room and back again? He was a man on a mission, and I had no control of this situation,that was for damn sure.  But you know who did?  He did.  Sure he was mad as hell, but he wasn't out of his mind with rage. No doubt rage was there but he was still in control.

Not once was I afraid.  Not once.  At least not of my husband. In fact besides the hand and the foot thing I stayed in place.  Yes I arched my back but that was a automatic response not a flight maneuver.  After a few minutes, I couldn't tell you how long, we heard the toilet flush on the main floor.  Someone had come home. Just like that it was over.  The job wasn't 'complete' but in situations like that where the abrupt stop isn't our doing the tension in the air dissipates at an unbelievably rapid rate. LOL.

I  fell to the ground, our duvet cover still in my clenched fists and sobbed.  Barney asked me why I was sobbing ( not always one to sob over pain...rarely actually though it has happened).  I couldn't tell him.  Just an emotional release I suppose.

Flash forward to the other day.  During a rather emotional discussion, Barney mentioned, "....but I always remember from reading at the start, 'never spank when you are angry' ".  I have had this discussion with several friends ( the submissive type ) over the years.  More often than not the response from them was..."pfft" or some version of that.  With anger, for me, comes conviction. With anger comes the knowledge that he is sincerely pissed off and I have really crossed the line.  This means something to him, it isn't just for 'me'. It is authentic. He is out to make a point and at no time am I going to dissuade him. Can I feel that other times?  Sure but it isn't as instantaneous. Would I want to experience anger ALL the time to that degree?  No I think I'd feel more like a failure than a person that messed up if it was a constant.  Of course having kids in the house doesn't make for many "in the moment spankings" to begin with.

Anyone who 'knows' us, Willie and Dexter Barney, is aware he isn't afraid to keep going until the job is complete. One of the reasons I am not over the end of the bed often is the fact that our bedroom is white.  I'll leave it at that.  Another being that it isn't the best position for Barney's  required 'round house arm movement' that is apparently required for me to 'understand' but I digress.  Barney isn't big on the lightly seasoned spanking. (No judgement, I've got a hard head.  Consider yourself lucky if you can let go with very little.  I am not that person. To be honest those Barney versions of  those spankings just tick me off.  I mean if we are going to do this, let's DO this.) He is more a purveyor of a 5 alarm fire type seasoning.<-  I suppose it is all relative.

Which brings me to another anger.  MINE.  Yup Willie the angry sub.  That is me.  I can't deny it.  Angry before, during and after a spanking at times.  When we first started out Barney was more of a reset guy rather than a punishment guy...probably because he was told not to spank in anger! LOL.  Anyway it was during those times where we realized I had the ability to manifest anger as a defense mechanism.  What can I say?  It is my super power. 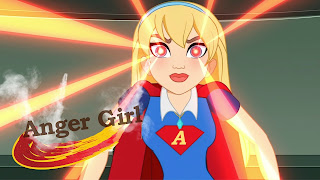 I noticed that when I was told to go and wait, instead of nerves anger started to build in me.  Not toward anyone, but it started to build.  This is probably where Barney learned to hone his craft of  forever and mercilessly spanking me through the anger. While anger almost always happens, spanking me through that stage in a reset  is accomplished most of the time,( probably because the emotions are not as high in these situations). It doesn't happen often in a punishment situation.

As I have said before punishments for us don't usually 'bring me back'.  In fact often right after I am distant and perhaps angry. It depends on how I was going in. If I was feeling self righteous, or hurt or misunderstood, I will be PISSED off after generally.  My guess is there is a lot of adrenaline coursing through me to deal with the amount of pain inflicted upon my person.  Not too mention the emotional toil. Anger can be wielded as a force field for physical pain in my case.  As my girlfriend once said years ago, "Sometimes it takes a while for the heart to catch up to the bum".  For me it is true.  Barney will often hug a 'plank' after. 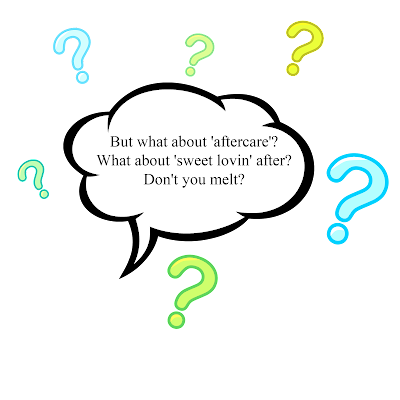 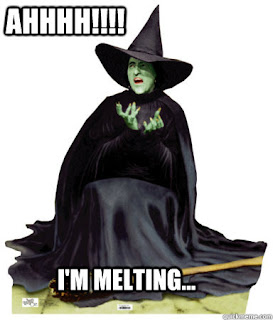 Pfft.  I thaw .................................eventually- hopefully or I find myself back there sooner rather than later.  As for sweet loving? LMAO  sure if you find your husband's leg hair, which suddenly have transformed into torture needles  on your wounded @$$ , while your cervix is being pushed out of your body via your throat sweet.  Then ohhhhhhhhhhhhhh yes the lovin' is sweet.  So sweet.

Sound horrible? No it isn't. It is a necessary evil.  Well it IS horrible....but that is the point. The anger eventually disappears and hopefully a new me appears.  But what I wanted to share was how for me at least there can be and is often anger.  I harbour no resentment toward my husband. I signed up for this.  It is just an emotion- for whatever reason.  It did take its toll on Barney and sometimes I think still can, (he sometimes sounds like Darth Vader having an asthma attack behind me).  Seriously emotionally I think it was something he needed to overcome, realizing that it is only a stage for me.

Before I got to know a few people who are 'like' me in this way I began to question if I/we were doing this 'right' or rather what was wrong with me?  I mean everyone melts into their husband's arms after a few 'whacks' and 'yes sirs'.  I on the other hand am snorting and snuffing, visualizing my heel coming up and catching him in a more sensitive place. I sweat, pull against restraints, buck...almost curse.  You know the " Faaaaaaaaaaaaaaaaaaaaaaaaaaaaaa" ?  I growl. To say I am unlady like at the time, is a gross understatement.  I am just gross! LOL. There is nothing beautiful about it.  Well maybe from my husband's point of view. Many times I still think, "Just let go dammit.  What is wrong with you???" Other times I think " Screw you buddy" Not nice but it is honest.

You know when I don't generally have those thoughts?  When my husband is really angry.( By the way I am NOT suggesting you anger your husband! I am just saying that there is no reason in our house for him not to spank when he is 'moderately' angry? lol).

My point?  Relax it is all normal.  For us, spanking when he is angry works better than after he has time to cool off.  For me anger is present more than melting-that makes melting so much sweeter.  The coveted prize if you will.  And if you are still one to only feel anger right away and haven't yet felt the 'climbing into his skin' aspect, give yourself time.  I am sure it can and will happen provided you allow yourself to feel that it is okay to not melt. Know you are not alone.  Release the preconceived notions of what you have read surrounding anger. Release the idea that you need butterflies in your stomach and should always fall into his arms after. Ideally that would be fantastic but if you don't feel it, you don't feel it.  This is life,your life, not a novel.  Spankings are painful and we all deal with pain and emotions in different ways. Sometimes they don't 'work' (OMG did she just say that????)  Be authentic with your feelings surrounding this, not ashamed of them.


(Oooooooh that ended kind of preachy...meh)