Moving from Supporting to Cultivating Submission

It has been so long since I have typed anything out I am not sure if I still 'have it in me'.  Time will tell I suppose.

A lot of what I am about to write may not be relatable to many, or perhaps insulting to some.  That isn't my intent.  This is merely my take on our adventure thus far. Several years ago I brought Dd to my husband, what has transpired since I know neither one of us could have foreseen.  Yes, all the great and wonderful things you read about that Dd brings to a relationship happened, as well as many not so wonderful things. Those of you who have been following along  over the last 4 plus years,are more than aware of the numerous stumbling blocks we have encountered.  I know for a fact we are certainly not unique in those 'hiccups'.  But that isn't what I want to process today.

I would like to say that somewhere along the line we gradually morphed from a Dd relationship to a D/s one.  Truth be told since starting Dd, ( as it was pointed out to me a couple of years ago) we have always been in a D/s relationship.  I know many out there in a Dd relationship still think of D/s as a sex based life, and perhaps you always will.  For those who know us, and those we know who identify themselves as a stronger D/s relationship than Dd alone,  we strongly believe that you need to have D/s to have Dd. This belief is founded by the fact you have to submit ( the small 's' on the right side of the slash) to the Dominant ( the big D) for your punishment/spanking whatever.  You don't have to agree with me, that is fine.  I just want you to know what our interpretation of this is before I continue.

When we started Dd, and for perhaps the first year Barney's role was actually one of support.  That is not too say he was not the growing leader.  His role however, after expectations were established,was one that was reactionary.  For example, if I did or did not do abc, I ideally could expect xyz.  If he noticed I was drifting away, he would react accordingly ( on occasion) to bring me back.

I spent the better part of two years discovering who I truly was, and then accepting it.  Initially when I first discovered the Dd lifestyle I longed for the closeness I had read about between couples that Dd created. In  those first couple of years we had the benefit of meeting several Dd couples who were further along in their adventure than us.  I remember Barney and I talking after one such vacation about a friend of ours and how he and I both hoped that I would be able to turn to him with the depths  she turned to her husband.  In the end we concluded she and I were different women and it probably wasn't going to happen.

We were wrong!  Thank goodness for that because it is wonderful (when it IS wonderful that is).  What changed?  Our methods for reaching  the core of me for one, but before that, our perception of me.  The latter point, however is another post...one I have written on my blog in various ways before.

OKAY FINALLY getting to my point. We changed our methods (an ongoing struggle by the way).  Or perhaps more accurately we embraced what was already there and allowed that to be the focus.  Barney (after much conversation, heartache and struggles on both our parts) began to understand that being proactive as opposed to reactionary was a far better way to allow me to be who we both desired.  I suppose I should reword that.  I haven't changed at all in many ways.  In some ways I have become much, much more feisty than before.  However, that is the whole of me.  Not always the BEST of me, but it is the authentic me. Those feisty episodes generally surface when I have felt hurt (not necessarily that Barney HAS hurt me, but I have felt hurt).  Those times aside, I am weightless.  I am not carefree by any means.  I just see things for the way they are.  Anxiety does not alter my perception.  I can view many things much more positively.  The most beneficial part is the feeling that I radiate from within.  There are no shields to protect me, because I don't require them. THAT is who we want me to be.

Sure I get hurt.  Sometimes far more than I ever did before, but I FEEL...oh do I feel.  It is most definitely a double edge sword, but one I will risk. .

Back to proactive.Barney said not too long ago that he will always want to support me in my submission.  Well......... that actually didn't go over so well. I do want my husband to be supportive of me in many, many areas of my life.  Where I don't actually require support is in my submission.  Hear me out. Perhaps I am splitting hairs, but the slight distinction has made a big difference for us. As far as my submission goes,  I own it.  I know who I am. I came to that conclusion a while ago. Prior to that I did need him to support me in my discovery. I am (most days) very comfortable with who I am and where I want to be/stay. He can't MAKE me submissive. What I need him to continue to do, and this isn't always easy due to life and reality beyond our small bubble, is to CULTIVATE my submission.  I need him to help create an environment that continues to allow me to embrace my core. When he cultivates there is no need to support (though I realize you can argue the support is implied) because I am flourishing.  There are no long term doubts.  Not to say there are not struggles.  But that is part of the cultivation process. 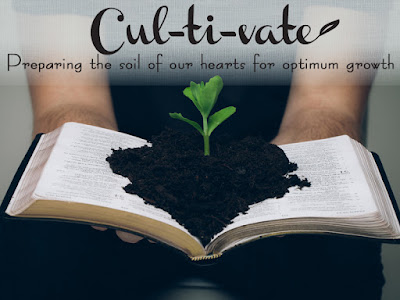 So what does that look like?  Well I could give specifics but everyone is very different. Honestly I am very different from day to day...week to week. A great deal of it has to do with removing bits of control from my grasp. Some days it is as simple as giving me tasks.  I don't need a list to accomplish things (though I don't by any means fault those who do), but there is joy to be found for me in accomplishing things that HE wants.  I still accomplish what I want - after his needs.  Most of the time his needs are things I would have already done anyway, but the fact that he sat down and thought about what he wanted and why means something to me. In a way it gives me permission to be submissive, (which one could argue is also a supportive aspect).  It allows me to see that my submission is important to him,and that is of the utmost importance to me. It also gives him a less abstract way of seeing my submission.

Those household task lists help keep me where I need to be, but they do not 'bring me' to where I need to be.  Helping me get closer to my core comes from things that are more challenging.  For poor Barney this generally means becoming more creative.  Some days it means humbling me, not humiliating but stripping me of my armour.  This can be physical, but more often than not he has to claim my mind before he can claim my submissive heartset again.  Generally it means taking me out of my comfort zone.  It doesn't always have to be a grandiose gesture.  Some days it can be as simple as bathing me.  YUP....for whatever reason that simple act softens me.  See?  Not so kinky.  Though there are other times where....well I'm not going to write about that!  *wink*.

Asking for things, and not feeling that the answer is ALWAYS going to be yes is another more 'tame' way he cultivates my submission.  Let me tell you, I really 'fail' at this, and OFTEN.  It is as if the question gets caught in my throat.  Generally it comes out as, " I'd really like another coffee".  Some days I get a flat out 'no'.  Other days I am on the receiving end of, " Well perhaps you should ASK me then".  If he is feeling generous, which is most times, he will respond with " Are you ASKING me?" If I am to be truthful the last one doesn't cultivate my submission much, but then again neither am I because I should just bite the damn bullet and ask.  Often I will forgo asking and do without. THAT IS HOW MUCH I HATE ASKING...LOL  I am aware..stupid..I want it, but I don't-

Conquering the battle within is my burden,creating that battle is his . AND THAT is how he cultivates my submission.