The Insecurity of Growth

No one is probably more surprised that I am writing a post here more than I am.  I'm actually not entirely sure why I am as the majority of people who once read here are long gone.  I suppose it is just to get it out there regardless and clear my mind- clear my mind in a small space not an overly public one! LOL

I used to think? feel? growth was extremely painful at times- and it is, but nothing compared to participating in another person's growth.  Yes the tables have turned and it is a tad daunting.  Let's see if I can explain.

To say we've had a rocky past year is an understatement.  To say the past 5 months were turbulent is beyond laughable.  There are tons of contributing factors to why I say that but I'm just going to stay with Barney and myself for now. Have you ever had a very good something happen that led to a cluster f*ck?  (might have to change that wording later LOL).  Well this happened between Barney and myself.  The aftermath left me more confused than ever. I didn't understand how something that was 'so good' (though not without issue) could morph into the worst period of our married life. ( Please no I'm sorry's -it's over now and we've moved on).

For months we stayed in this endless loop of destruction for lack of a better word, but NOT overly dramatic I can assure you. I had my suspicions or assumptions, but I didn't really give much weight to them as it isn't my place really to fill in the blanks.  It isn't fair.  Not to mention that emotionally I was a train wreck.  I was also a cobra, waiting to strike if I felt the least bit threatened.  So, so far removed from what ttwd is supposed to be about and no where NEAR my core.  In fact I began to believe that my core appeared more like this: 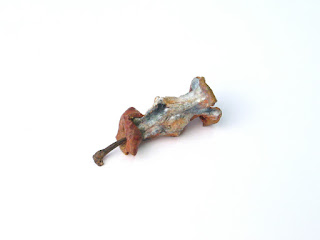 Anyway, I mention the above because no matter how hard I/we try it still lurks in the shadows-fear.  I don't want to ever go back to feeling the way I did in December and in many ways that has me standing still ( but hey at least I am not 'running').  Right- back to the point of my post.

After what seems like a painfully (perhaps pun intended) long time Barney has given voice to something he has discovered about himself.  I tease him about the long time, but not.  I understand how it must have been difficult to actually admit to himself what he discovered.  I wasn't shocked, in fact I was waiting to hear it.  In all honesty I can't say I was certain I ever was going to hear it, but I wasn't shocked when it finally came out.  I felt relief for him.  Maybe it would be more truthful if I said I felt relief for us.  For a long time now I have suspected what he told me to be true, but I wasn't sure if it was me making something fit, or if this transition was actually happening. I also felt that perhaps this was holding him/us back.

I have often expressed to friends that I had the 'benefit' of discovering initially that I was submissive, though I wasn't sure exactly what that entailed, on my own.  I suppose it would be more accurate to say I knew something drew me to ttwd, and discovering who I was within that context was a personal self discovery.  While Barney was along for the ride, and there to support me when needed a great deal of it I was able to do without being too scrutinized.  Sadly this doesn't generally happen to the person who ttwd is brought to.  Barney's actions, no matter how hard I tried not to, have been under a microscope since the beginning in many ways.  Not saying it was always a negative observation. Sometimes  it was innocuous.  Other times I observed to ask questions to help him discover or uncover the root of the 'issue' we both felt.  Regardless though, he didn't have the benefit of private unearthing I did, and part of me feels guilty about that.

All this to say currently I am struggling in a way I am unfamiliar with, yet sort of familiar with. LOL.  Clear as mud right? I have been supportive ( I think) with Barney while he embraces his discovery. ( I feel like I should at least say here he's not Gay nor is he a switch -not that there is anything wrong with either LOL).  I have been trying, at least physically to be all I can for him;encouraging him, reassuring him in the moment etc.. Again I say, I think, or hope at least.  My concern comes when we are not 'in the moment'.  These moments eventually bring about a vulnerability- though it is doubtful that that comes across often.  Barney recently mentioned he has noticed a difference, but the issue remains with the fear factor, or the standing still aspect.  Internally I feel.........something, but it doesn't seem to project outwardly.  <---- This part is not unfamiliar to me.  How I get there is, and the fear of the depths of the vulnerability is.  It seems like I am unable to peek out from behind the curtain so to speak.  At least the wall has transformed to a curtain, but my issue/concern is, how do I support him fully if I can't seem to come out completely?

I am gauging my reactions after the fact.  I am second guessing what I should be saying or doing.  Am I being helpful? Should that matter?  There of course should be no issue with this line of thinking, with one exception, it doesn't address what is happening inside with me.  Yeah, yeah ALL about me! Now this one thing about Barney shouldn't matter about what is happening to me, but then there is the relationship part after to contend with.  If I continue to focus on this solely for him, what I need to do, how exactly will it help us in the long run if I don't understand what it is doing to me?  Do I put a time limit mentally on it?  Wait until *I* believe he's more secure in what he has discovered and it is okay- then focus on how it affects me?  I don't want to give him insecurities or added pressure while he is unearthing a desire he has. I don't want to derail his progress because it appears to have the potential to impact me (not in a bad way) should I get comfortable enough to allow it. Am I controlling this by not being open about it?  I can try and work on how it is affecting me on my own, but that still leaves space between us.  I don't know how to work on myself or my feelings without being withdrawn to a certain extent.  Doing that would DEFINITELY send the wrong message to Barney.

I know we are a partnership when it comes to our relationship. The issue has been it really  didn't seem that way for a great majority of the past 5 months or so.  Bringing up feelings, insecurities, unprocessed thoughts has become more of an issue for us then it had been in the past. I feel like it would be a game of Russian Roulette to have this discussion if I initiated it.  While he has given himself permission to explore this 'new' part of him, I am not so sure throwing my emotional 'crap' on him would be a good idea.  Maybe I should give him more credit, but I am sincerely fearful for both of our sake.  Not to mention other life 'drama' still oozes in and can derail us as well.

I don't want to be the sole reason for things going sideways.  I just don't know what is going to do it- me sharing now, or not sharing and hoping it doesn't come out as overly emotional vomit all over him at an inopportune moment!

Not currently how I feel but I can project a similar atmosphere if  over time *I* feel it isn't safe to share.
at 3:19 PM