Ah, that's better, back to one blog again.

Last week marked 8 years since I opened this blog and a few days later 8 years since TTWD was brought into our life.  I am going to give you some facts concerning that, but not facts and figures on blog posts, visitors numbers or even things I have personally learned- the latter has been documented here and Lord knows on other's blogs over the years. I am going to give you some hard facts about TTWD in our experience.

It is HARD WORK.  There are tears and LOTS of them.  We didn't jump on the D/s wagon and skip off into the sunset.  Sometimes, especially in the beginning, it appeared that ttwd caused more angst then it did good.  At least percentage wise.  Until we realized, it wasn't Dd/s that was the root cause, it just brought out things (ohhhhhhhhhhhhhhhhhhhh so many things) that we never acknowledged before.

He's not enforcing the rules !
Actual reason for her hurt- feeling like she has been overlooked, deep seated issues from years with and before her husband
Actual reason for him not- Distracted by external pressures that he does not want to burden her with ( Dom vs husband issues).  Or doesn't feel he has the right because...(not my story to tell so I won't share his whys)

She's distancing herself from him
Her reason:  She is overwhelmed by the feeling that she is too much or her need is not his.  Insecure that she is not accepted- again issues from the past

His dilemma:  Did he do something wrong? He discovered through communication he's hurt her with action or inaction in the past throughout their marriage  .  While she is over some of the things brought up, he is not.   Paralysis by Analysis.

She's Snippy
Her...HELL could be any reason.  Mostly insecurity at the start of ttwd.  Fear it was going away.  Fear it wasn't HIS thing.  Now could be external stress, or something he said that triggered her in a way he has no clue about, or maybe he does.  Emotions are always right on the surface now with ttwd, and learning to deal with them in an appropriate manner is a constant work in progress for her. Often her choices seem to be Distance or Snippy.  Neither are beneficial

He walks away during a conversation

Him:  He needs time.  Re his emotions, he is not used to feeling these deep feelings of anger at times because she disappointed him with her actions.  It was easier before because the expectation was not there.  Yet it is conflicting as they are so much closer why should he feel such anger at times.

Her : Why won't he stay and work this out RIGHT NOW?

Those are just some of the issues we have dealt with over the years and some we still slip into even to this day at times.

***
This wouldn't be a good  anniversary blog post if I didn't conjure up some  far reaching analogy.  Actually the analogy found me and I decided to write this post.  Otherwise I would have skipped another October announcing how many years I've been kicking around....LOL

We have a couple of jute rugs in our house.  The long runner that is in our front entrance started to unravel a while ago.  Both of us noticed the one end, and did a half ass patch job, tying willy- nilly so the vacuum wouldn't destroy the entire thing one day.  ( The smart kids in the class probably know where this analogy is going already lol).

A few weeks ago Barney tasked me with the job of actually FIXING the rug.He had rolled it up and put it in our room  with the damaged end exposed until we could examine the solution needed. 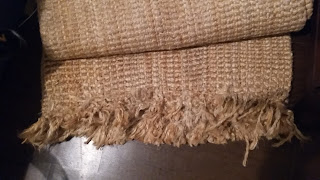 I looked at it and unravelled a bit of it, then tried to retie, but it wasn't really working.  Next I decided that some of it actually had to 'go' before I could retie or fasten new ties.  I used the jute I had taken out of the runner to make new ties, instead of trying to loop around what was there like it had been done originally.

We have a close friend who fancies himself a bit of a rope expert. 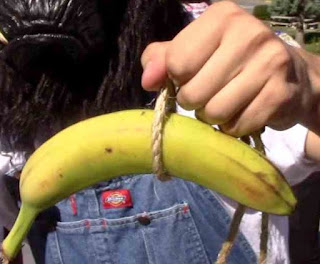 I kid.  He's actually A MASTER, which is why I thought of him when I was fixing the rug.

I teased him that I wished he was here that day because I needed his rope/knot tying skills ( I believe I actually said macrame skills.  While I respect his ability, I STILL have to annoy him *wink*).  While I was teasing, sort of, he of course became serious about our rug.  He asked me what I had done.  He seemed moderately satisfied, but then offered some suggestions to improve what I had done if I found it wasn't working in the long run.  Good grief, how I didn't see this  conversation as pretty much the dynamic of our ACTUAL friendship at the time-( I tell him what I've done, he seems to think maybe something better will work next time..LOL). I'll never know.  Anyway.  I tucked away his information, knowing damn well I had to do it or I'd be annoyed at myself later because knowing him he was probably right, and that in and of itself is a different kind of annoying. LOL

I replaced the rug earlier this week.  I put the damaged end nearest the door where guests couldn't see it.  They would merely be walking over it to enter the house, but when sitting in the dining room the good end would be showing.  Today I decided to take his advice and retie the pristine ends before they ended up like the hidden end.  As I was tying the ends with fishing line, as apparently jute being a natural fibre stretches and loses it's shape over time, I thought of how this really is an analogy for our lives.

When we take time to secure the things we know are looking good, it solidifies them.  But really we need to take a closer look at the good things to make sure they are as good as we believe them to be.  By the way the pristine end of the rug,was about to give way in a few places.  Barney and I didn't necessarily do that during the first 15 years of our marriage.  One can blame the busyness of getting by with 3 small boys, and that was indeed a factor in our case,but it shouldn't have been an excuse.  It didn't occur to us that while things appeared appealing, we were stretching and giving way. silently.  We ended up like the messy end of our jute runner.

Initially before I asked B for ttwd, we tried other things to strengthen our bond.  Much like when we both half- assed tied the runner,we used what we had but we didn't even go so far as to unravel part of it so we had more to work with even if it appeared we were losing something to do so.

When we started what is referred to as Dd, it improved.  Many things were unravelled and we had more to work with because of it.  It wasn't perfect though.  Our timing with individual growth, our individualized experiences, and well demons didn't always coincide with the other. We were unable to fix a 'rug'  so that wouldn't unravel if run over with the vacuum ( life and all it's annoyances at times).  If left unchallenged the rug was fine enough.  Sadly for many of us, life doesn't work that way.

And back to the friend(s).  Sometimes without even knowing it we find our way to people or they find their to us.  Perhaps a blog post, a chatroom, a suggestion that they don't even know stuck with you, creates an epiphany or a direction to go. A jumping off point.  A different way to look at things - whatever.  Steve tells me some day I may want to tie a fishing line around our ends and to keep an eye on the other rug too because of the jute's organic nature.  Today I did that.  I feel much better about both ends because I took his advice ( no doubt he'll be floored- pardon the pun..lmao)

The messy end will always look messy to us.  That cannot be changed.  It isn't bothersome.  It isn't going to unravel further because it has been fixed, but the fact remains, that it wasn't taken care of in a way it should have been from the start to prevent that.  Nothing we do now is going to change history.  Do I wish we knew then what we know now?  Absolutely.  Still doesn't change the rug though.  We learned what can happen by seeing and experience, and the only thing we can do is protect the good things, and the things that are different but not unravelling anymore.

I have another small carpet that has to be on top of the jute rug anyway, as it is right at the door.  It is only a temporary natural fibre rug.  It gets replaced when needed.  The less than pretty end is buried under there.  Not in shame, but because of where it is located and it offers an added layer of protection- this other carpet. Why not put the more sensitive portion of the rug there?  Much like our history together,we have very sensitive issues from our lives before ttwd, some that ttwd shone a huge spotlight on.  We have mended those areas ( for the most part) but they still need to be protected because  the strength that  we thought was once there wasn't and  has been repaired. We want to keep that area closely guarded.

That messy end is no secret in most dynamics.  Sure maybe for some it didn't have to unravel ( we didn't until we started Dd) but someone stretched, or grew or discovered or ttwd wouldn't be a thing they did. I'm not ashamed of our messy end- I am just sorry it happened when it could have been prevented perhaps.

We have to keep a close eye on the repairs and the reinforced newer areas. It IS organic and there are two sides to it.  Things are going to stretch, and get out of shape.  The key is to keep on top of it as best we can and tighten up things before they become a problem due to lack of attention.  That is what the messy end is.  A reminder